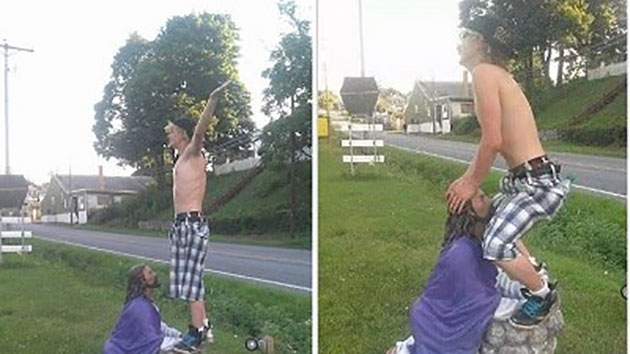 Teenagers are prone to dumb, tasteless pranks, but one 14-year-old is facing prison time for his latest stunt. The teen, from Everett, Pennsylvania, hopped on top of a statue of a kneeling Jesus—in front of an organization called “Love in the Name of Christ”—and simulated oral sex with the statue’s face. Naturally, he posted the pictures to Facebook, which made their way to authorities.

Officials in Bedford County charged the teen (whose name hasn’t been released) with desecration of a venerated object, invoking a 1972 Pennsylvania statute that criminalizes “defacing, damaging, polluting or otherwise physically mistreating in a way that the actor knows will outrage the sensibilities of persons likely to observe or discover the action.” You’d think an appropriate punishment for a kid violating this seldom-invoked law might be picking up trash or, at worst, paying a fine. If convicted, he faces much worse: two years in juvenile detention.

Pennsylvania is not the only state with a “venerated objects” law—many states have some version of it, but most define “desecration” as vandalizing or otherwise physically harming an object of civic or religious significance. Alabama, Tennessee, and Oregon have laws like Pennsylvania’s, which can be interpreted to punish individuals—like this bold, dumb teenager—who simply decide to do something offensive.