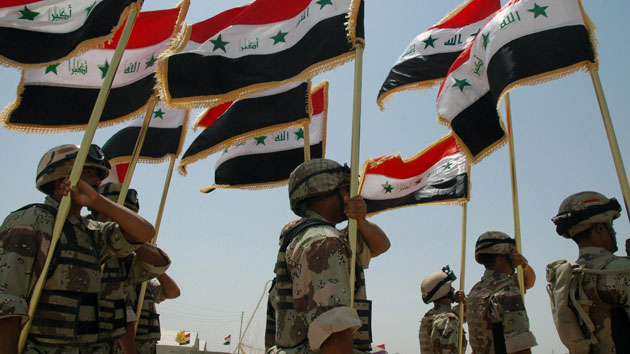 Soldiers from a US-suppplied Iraqi brigade display their colors during a 2006 transfer of authority ceremony.Specialist George Welcome/US Army

As US bombs rain down on ISIS targets in Iraq and Syria, analysts agree that this war will ultimately be won on the ground. Too bad the Iraqi defense forces are a shambles. The New York Times reports that the United States still has to train the country’s 26 “intact and loyal” brigades. And the Iraqi government has yet to recruit and set up national guard units. “It is not going to be soon,” says a State Department official.

Sound familiar? Following the American invasion of Iraq in 2003, the US government spent billions trying to rebuild Iraq’s security forces so they could fight insurgents such as ISIS. By the fall of 2012, about a year after the full withdrawal of American troops, this effort had consumed about half the money the US government spent on Iraq’s reconstruction, according to the final report of the Special Investigator General for Iraq Reconstruction (SIGIR).

Here’s where that money went:

Meanwhile, the estimated cost of the new war in Iraq? Around $15-$20 billion. That’s according to a recent estimate by Gordon Adams, Bill Clinton’s defense budget confidant and a professor at American University. But that could change quickly. Two weeks earlier, Adams estimated this campaign would cost $10-$15 billion.