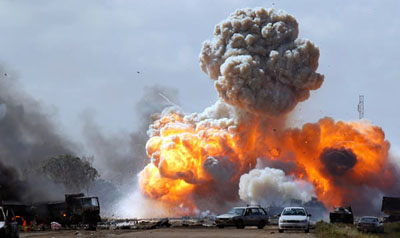 Andrew Sullivan wonders why fiscal conservatives aren’t asking some searching questions about the cost of the ISIS campaign:

The ISIS campaign is utterly amorphous and open-ended at this point — exactly the kind of potentially crippling government program Republicans usually want to slash. It could last more than three years (and that’s what they’re saying at the outset); the cost is estimated by some to be around $15 billion a year, but no one really knows. The last phase of the same war cost, when all was said and done, something close to $1.5 trillion – and our current travails prove that this was one government program that clearly failed to achieve its core original objectives, and vastly exceeded its original projected costs.

If this were a massive $1.5 trillion infrastructure project for the homeland, we’d be having hearing after hearing on how ineffective and crony-ridden it is; there would be government reports on its cost-benefit balance; there would be calls to end it tout court. But a massive government program that can be seen as a form of welfare dependency for the actual countries — Turkey, Iran, Jordan, Kurdistan — facing the crisis gets almost no scrutiny at all.

Yep. The only problem with Sullivan’s post is the headline: “Does The GOP Really Give A Shit About The Debt?” Surely that’s not a serious question? Of course they don’t. They care about cutting taxes on the rich and cutting spending on the poor. The deficit is a convenient cudgel for advancing that agenda, but as Sullivan says, “it is hard to resist the conclusion, after the last few weeks, that it’s all a self-serving charade.”

Indeed it is. And not just after the last few weeks. After all, if they did care, they’d be demanding that we raise taxes to fund the cost of our latest military adventure. Right?