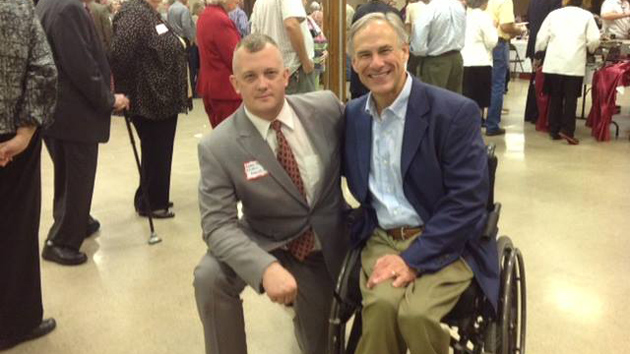 Iraq War vet Larry Smith is the Republican nominee to take on Rep. Filemon Vela (D-Texas) in November. He’s also, it turns out, an armchair psychiatrist. According to Smith, Barack Obama’s handling of the child refugee crisis along the Mexican border suggests the president is suffering from Münchausen syndrome by proxy, a rare psychological condition that causes caretakers to abuse kids.

“Today, we hear of reports that children are being abused, being used by drug cartels, and even dying,” Smith said in a statement on his website last Thursday. “If a high school administrator prompted such mass abuse, that person would quickly be without a job and perhaps even found behind bars. The mental stability of the school administrator would be in question. Is a President of the United States who does such horrific acts deserving of less scrutiny and accountability?…People who intentionally hurt children for attention can be accused of Münchausen Syndrome by Proxy.”

Münchausen syndrome by proxy is often tabloid fodder and often deadly. In June, a New York mother believed to be suffering from the affliction was charged with second-degree depraved murder and first-degree manslaughter after feeding her son so much salt he became brain-dead. In another Münchausen case in 2011, an Arizona mother was charged with child abuse for deliberately poisoning her daughter.

The syndrome is itself controversial; Helen Hayward-Brown, an Australian medical anthropologist, warned in 1999 that the condition is consistently misdiagnosed, to the point where parents of children suffering from chronic illnesses are instead being accused of child abuse. Although Münchausen syndrome by proxy often results in child abuse, most child abuse cases have nothing to do with the disorder. The Cleveland Clinic estimates that about 1,000 cases of child abuse (out of 2.5 million annually) are a result of the illness.

Conservatives have been quick to capitalize on reports of crowded immigration detention centers over the last month. Rep. Blake Farenthold (R-Texas), who represents a South Texas district that neighbors Vela’s, called the crisis “Obama’s Katrina.” On Tuesday, former vice presidential nominee Sarah Palin called for the president to be impeached over his handling of the flood of migrants. Smith, though, is the first to claim that the crisis has been triggered by Obama’s medical condition.

Immigration isn’t the only area where Smith has taken aim at conventional wisdom. On Sunday, he was denounced by the Council on America Islamic Relations for comments he made in a Corpus Christi newspaper about Islam. Citing his experiences as an Army captain in Iraq, Smith had called the faith “horrendously oppressive to children and women.” After receiving a critical note from an American Muslim, Smith went even further. “I was slightly misquoted in the article but that being said I will not back down in my thinking,” Smith wrote on his Facebook page. “If the majority of Muslims are peace-loving then as a well traveled man I should have met one by now.”

What’s more, Smith argued that the woman who had written to him was an apostate, because the tolerant and loving faith she described did not exist. “From my experiences overseas to watching, listening, and reading from numerous sources I have come to a conclusion: you are not a muslim.”

Smith faces an uphill battle against Vela, though, who was elected to the newly drawn seat in 2012 with 62 percent of the vote.