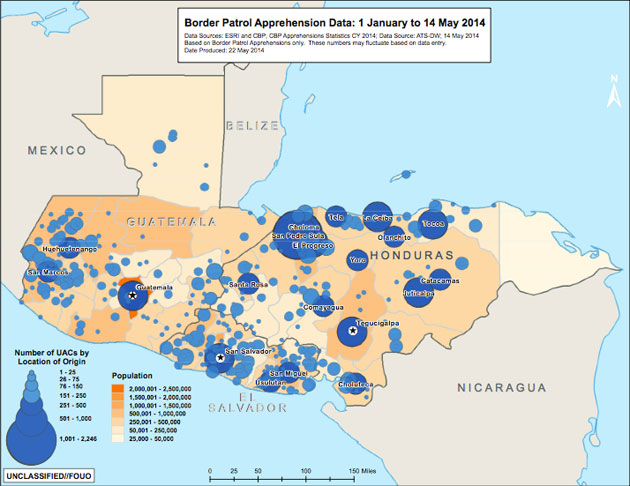 A recently produced infographic from the Department of Homeland Security shows that the majority of unaccompanied children coming to the United States are from some of the most violent and impoverished parts of El Salvador, Guatemala, and Honduras.

The map documents the origins of child migrants apprehended by the Border Patrol from January 1 to May 14. It was made public by Adam Isaacson of the Washington Office on Latin America, a human rights organization, and it includes the following analysis about the surge in child migrants:

…Many Guatemalan children come from rural areas, indicating that they are probably seeking economic opportunities in the US. Salvadoran and Honduran children, on the other hand, come from extremely violent regions where they probably perceive the risk of traveling alone to the US preferable to remaining at home.

This echoes what I found in my yearlong investigation into the explosion of unaccompanied child migrants arriving to the United States. As I wrote in the July/August issue of Mother Jones:

Although some have traveled from as far away as Sri Lanka and Tanzania, the bulk are minors from Mexico and from Central America’s so-called Northern Triangle—Guatemala, Honduras, and El Salvador, which together account for 74 percent of the surge. Long plagued by instability and unrest, these countries have grown especially dangerous in recent years: Honduras imploded following a military coup in 2009 and now has the world’s highest murder rate. El Salvador has the second-highest, despite the 2012 gang truce between Mara Salvatrucha and Barrio 18. Guatemala, new territory for the Zetas cartel, has the fifth-highest murder rate; meanwhile, the cost of tortillas has doubled as corn prices have skyrocketed due to increased American ethanol production (Guatemala imports half of its corn) and the conversion of farmland to sugarcane and oil palm for biofuel.

Below is a more granular look at where kids are coming from, also produced by DHS. San Pedro Sula, the world’s most violent city, was home to the largest number of child migrants caught by the Border Patrol (more than 2,500). Honduras’ capital, Tegucigalpa, sent the second-most kids, fewer than 1,000. 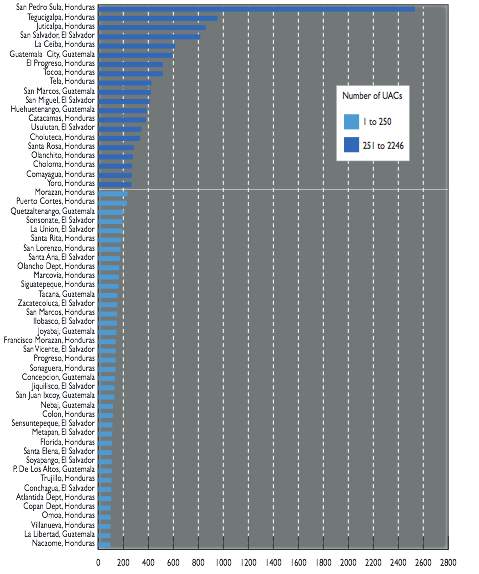