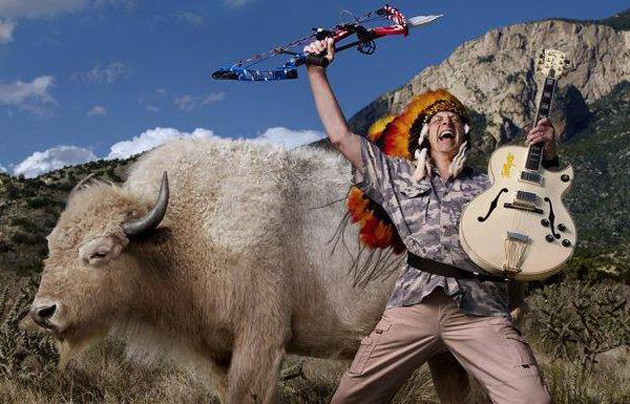 This is an actual image from Ted Nugent's Facebook page.Ted Nugent/Facebook

Ted Nugent doesn’t have a racist bone in his body. But sometimes racist words just happen to come out of it. On Monday, tribal officials in Idaho canceled the aging rock-and-roller’s scheduled concert at a Coeur d’Alene casino over his past rhetoric. Per Indian Country Today:

Later in the day, [tribe spokeswoman Heather] Keen said in a statement, “Reviewing scheduled acts is not something in which Tribal Council or the tribal government participates; however, if it had been up to Tribal Council this act would have never been booked.”

Then, Monday evening, Keen announced the concert was being canceled, explaining that “Nugent’s history of racist and hate-filled remarks was brought to Tribal Council’s attention earlier today.” Tribal Chief Allan added that “We know what it’s like to be the target of hateful messages and we would never want perpetuate hate in any way.”

Among the racist issues brought to the tribe’s attention: Referring to President Obama as a “subhuman mongrel,” and his wholehearted support for the Washington football team name, which he outlined in a 2013 op-ed for the conservative conspiracy site WorldNetDaily, titled “A tomahawk chop to political correctness.” The first line of the piece is, “Every so often some numbskull beats the politically correct war drum…” and it continues at pace from there, nodding to “Native Americans whose feathers are ruffled” and, “wafting smoke signals of real distress.”

Nugent responded to the canceled event at the Coeur d’Alene casino and calls for similar cancellations elsewhere by calling his critics “unclean vermin,” thereby refuting any further claims of racism.