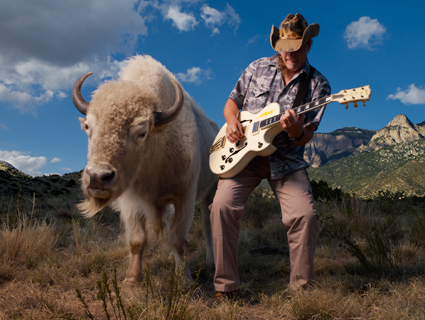 Tell friends you’re going to a classic-rock show in San Francisco and bands like Furthur and Journey might come to mind. The last thing they’d expect is a gun-toting Glenn Beck pal with a ranch in Texas, unless they knew that 62-year-old Ted Nugent regularly swings through town on his US tours—which have been happening for 40 years and counting. It’s no surprise that a guy who draws cheers from his audience by exclaiming, “Let’s hear it for dead shit on the fucking grill!” once got in a tiff with SF animal-rights protesters that ended up with a 21-year-old activist being hauled off to jail. That was 11 years ago. In an email after his most recent show, Nugent told me he hadn’t run into any trouble this time around. “But I was lookin’.”

I arrive outside The Independent, a venue that’s a bit small for Nugent’s oversized persona, 15 minutes before the doors open. There are about six dozen people waiting in line, mostly middle-aged white guys, some donning an assortment of wide-brimmed hats and camo. It’s not exactly the mix of youthful hipsters and aging hippies you normally encounter at shows around here.

Most of these guys it seems, have been Nugent fans since the 1970s, but up at the front of the line, I spot an anomaly: a young couple from San Francisco’s Marina District. “We’re very conservative,” explains the man, noting that he, like Nugent, is an avid hunter. There probably aren’t many people here from the city, he wagers.

Indeed, standing next to the couple are a group of Nugent fans from out of town.

Another guy, sporting a goatee and Harley-Davidson T-shirt, smokes a stogie and sips a tallboy from a paper bag between puffs. His name, he says, is Evil Genius, and “everyone will know who that is.” He raps off a sampling of his favorite poetry, eyeing my steno pad to ensure I’m taking it down. There once was a man from Madras / His balls were made of spun brass / In stormy weather / He clung them together / And lightning shot out his ass.

Nugent hails from Detroit, not Madras, but the words are apt. A man in the middle of the line wears an “Uncle Ted Wants You!” shirt, on which a beaming Nugent with an NRA button pinned to his chest clutches a lightning bolt. (Later, during the show, Nugent displays his trademark crude cockiness: “Let’s hear it for the tightest fucking band in the world!”)

At the back of the line, a man who’s been into Nugent ever since listening to the double-platinum Free-for-All on eight-track in the seventh grade tells me, “I hope he’s not too political. I’m here for the music.”

At first, the guy gets his wish. Opening act and fellow Detroiters Brent James & the ContraBand play just one vaguely political song, a shout-out to the troops. When Nugent first takes the stage, his band is pure rock-and-roll exuberance and little else as it launches into high-energy renditions of “Free-for-All” and “Spirit of the Wild.”

Of course, Nugent’s backdrop is a giant American flag, and it’s a secret to no one that he’s a bit of an oddity in this liberal haven. Soon enough, he’s ragging on California in general—”The Independent? I didn’t know that was legal here”—and telling off-color jokes about San Francisco’s Chinatown District. He introduces “Dog Eat Dog” by suggesting that people eat sweet-and-sour dog, and boasts that he dined on tiger-dick soup earlier in the day—a claim that becomes one of the evening’s running themes.

“The status quo can suck my tiger dick, along with everyone in the White House!” Nugent rails.

Example: It being the fifth of July, Nugent deems it “Defiance Day”—an extension of Independence Day. He honors the occasion by shouting, “The status quo can suck my tiger dick, along with everyone in the White House!” It’s not quite to the level of telling Barack Obama to “suck on my machine gun,” as he did at a show four years ago, which is probably for the best. It gets the point across nonetheless.

Perhaps to the liking of his less politically inclined fans, Nugent spends no time discussing Obama’s potential Republican opponents in 2012, so I ask him for his thoughts in my email. “I admire all of them to varying degrees,” Nugent replies, “but I am praying Texas Gov. ‘Rock’ Perry runs.” He also leaves gay marriage alone at the show, but emails that it’s part of the “cult of denial regarding what marriage actually is.”

Nugent, who credits his impressive stamina in part to lifelong sobriety, does at least take a shot at Bay Area hippies. “It smells like California in here,” he accuses the crowd halfway through the set, although the room has more of a booze-and-BO odor than that familiar skunky scent.

Growing up in Detroit, Nugent tells his crowd, everyone sounded as good as he does tonight. “Then all the dumb motherfuckers got stoned, and I’m the only one left.” In his email, Nugent later laments that his hometown has “died an ugly, tortured, self-inflicted suicide thanks to 40 years of liberal shysters.” Today, he says, “Detroit is now a spirit more than a city.” (Read Charlie LeDuff’s great piece on the city’s woes here.)

During his encore, Nugent continues to toss political correctness to the, er, tigers. He retakes the stage in his signature Indian headdress to play “Great White Buffalo.” Not long after, all four band members are wearing army helmets. An American flag is planted in a prop rock at center stage and the aging rockers strike an Iwo Jima pose. They end the show by raising what appear to be assault rifles above their heads as Nugent shouts, “Never forget, motherfuckers! Never forget!”

My liberal sensibilities tell me that I should be offended by any number of things that I’ve witnessed tonight. I can’t help but laugh, though. The man’s a hell of an entertainer and he knows it.