On Thursday, the Washington Examiner‘s Betsy Woodruff reported that a veteran of the Netflix political drama House of Cards is working to produce a reality TV show based in Washington, DC. The show would star local “up-and-comers,” including Capitol Hill staffers (“the best and brightest on the hill”) between the ages of 19 and 29.

A casting session is set to be held on April 26. One source told the Examiner that the first round of casting has already occurred. (It’s unclear how many Hill staffers would actually be up for this, since most Senate and House offices probably wouldn’t allow employees to take part in a potentially revealing reality series.)

Mother Jones obtained the casting call, which is dated April 14. Check it out: 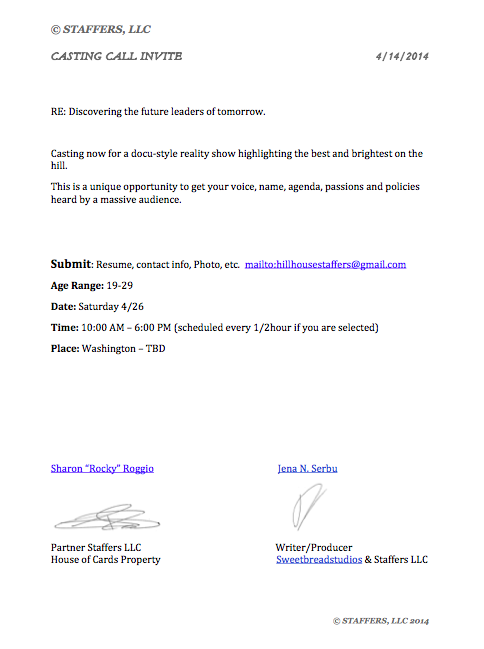 Sharon “Rocky” Roggio, who’s apparently behind the project, was the assistant property master on this year’s season of House of Cards and worked on A Very Harold & Kumar 3D Christmas and the Red Dawn remake. Jena Serbu served as a production designer on Amish Mafia and Breaking Amish: LA.

Other attempts at reality TV in Washington include MTV’s The Real World: D.C. and Bravo’s The Real Housewives of DC. In 2011, Doron Ofir Casting (the company behind such reality-TV hits as Jersey Shore) put out a casting call for “young hot politicos who care about America [and] follow the heated debates, rallies, protests and scandals!” Last month, the Washington Post reported that Leftfield Pictures, the Manhattan production company behind Bravo’s hit show, Blood, Sweat and Heels, is considering launching a DC version of the series. TV dramas and comedies set in Washington, DC, include Scandal, Veep, The Americans, and the attempted sitcom H Street.