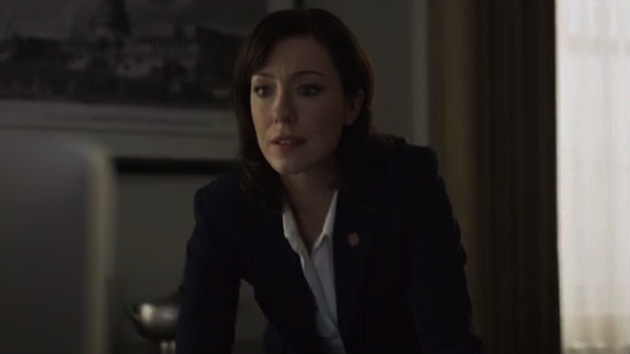 Democratic congresswoman and war vet Jacqueline Sharp (played by Molly Parker) is one of the most sympathetic characters on the Netflix political drama House of Cards. In a series populated by dark, purely self-interested, and/or corrupt characters, Sharp is something of a refreshing outlier. She is smart and strong, particularly when in a room of cynical, powerful old men. She is generally a kind and upfront person. She demonstrates an aversion to unethical deal-making. And she isn’t a heartless mass-manipulator on the scale of Vice President Francis Underwood (Kevin Spacey).

“I don’t think that this character is a sociopath. I think that she has a conscience,” Parker said of her character. “I think that she’s a principled woman in terms of her point of view, her perspective as a soldier.”

However likeable or principled she may be, could she also be the show’s first war criminal?

In the first episode of season two, Underwood informs Sharp that he wishes to have her succeed him as House Majority Whip. When she asks why he is so adamant, the morally bankrupt Underwood reveals that he picked her because of her “ruthless pragmatism” in wartime. He asks her about the number of missile strikes she ordered during the war, and how she ordered them knowing many innocent women and children would perish in the attacks. “I had orders to eliminate the enemy,” she says, rationalizing the civilian casualties. “I watched apartment buildings, entire villages, gone, like they were never there.”

Her actions clearly haunt her. In a subsequent episode, when she is in bed with her lover, she confesses in sorrow that she “killed a lot of people,” before she tells him to continue bringing her to climax.

The series doesn’t spend much more time than that getting into her war record. But with the information we have, does it sound like Rep. Sharp should be hauled off to The Hague?

“I’ll have to give you the law-professor answer here, which is it depends,” says David Glazier, a Loyola Law School professor and former US Navy surface warfare officer. “In the scene, as you describe, there are military objectives. If these were well-armed, super-dangerous enemies in these buildings, and it was necessary to take them out to win the war, or save lives, or whatever, we’d have to assess whether civilian harm inflicted by the attack outweighed military advantage. But if there were just a couple snipers, and a whole apartment building full of civilians taking cover, then it could constitute a war crime.”

In the real world (and, presumably, in the House of Cards universe), these kinds of international laws of war to this day are not formally codified. For instance, Protocol I, a 1977 amendment protocol to the Geneva Conventions concerning the protection of victims and civilians in international armed conflict, was an effort to codify some of these rules. The United States has yet to ratify, but American military personnel who commit atrocities or murder can face justice in US courts-martial.

“Most people who know something about the laws of war know that in actual prosecutions, the ability to achieve a conviction is pretty limited,” Glazier says. “Just the fact that you conduct an attack that kills civilians—unless you can show that the commander disregarded clear information that was provided to him or her at the time, or that the intention was to kill civilians—doesn’t guarantee conviction.”