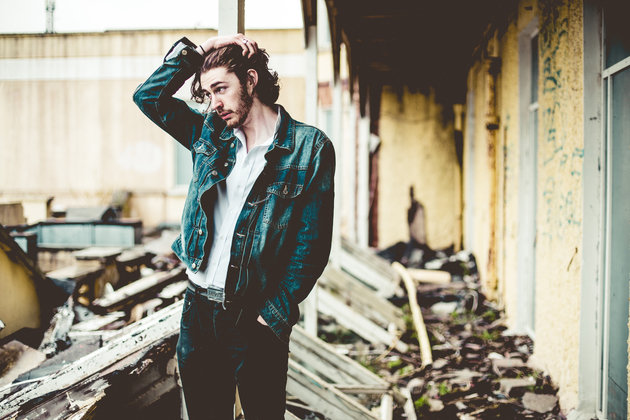 It starts slowly. A minor chord strikes first, sounding alone before progressing under a deep, soulful voice. The melody is haunting. Mysterious. The song begins to build. Voices and instruments are added to the mix. Is the tempo increasing? By the time it climaxes into the chorus, you find yourself closing your eyes, clenching your fists—and singing out loud.

Andrew Hozier Byrne—a 24-year-old Irishman who goes by his middle name onstage—has captured passion in his first single, “Take Me To Church.” “It was always about sexuality,” he says earnestly over a crackling phone line from a Dublin café. “There is no greater celebration of life, and nothing more human than a sexual act.” Intended as a swipe at the Catholic indoctrination so intrinsic to Irish culture, Byrne uses the song to speak against any construct that condemns sexuality, which he believes “undermines humanity at its most natural.”

Liturgical language is weaved into the lyrics but turns church dogma on its head—it is used to describe a lover. The chorus outwardly denounces church doctrine:

Take me to church
I’ll worship like a dog at the shrine of your lies
I’ll tell you my sins and you can sharpen your knife
Offer me that deathless death
Good God, let me give you my life

Byrne found that the message also lent itself to the LGBT community’s struggle against discrimination and hate. He decided to deploy it as the soundtrack of a brutal video about abuses occurring against the gay community in Russia that he hoped would have a greater impact. His instinct was correct: Viewers on Youtube and Reddit flocked and reeled. The video went viral overnight, generating more than 2 million views to date.

Byrne emphasizes that the video is no exaggeration, and while perhaps it might have been nice to cast the issue in a more hopeful light, he and director Brendan Canty (the former Fugazi drummer) opted for realism. “We weren’t trying to go for sensationalism or shock value or anything like that,” he says. “Of course it is shocking—and it should be shocking—but this is what’s going on.”

The response, he reports, has been nothing but positive. “On YouTube the comment section is often like a toilet wall,” he says. The few homophobic commenters, he explains, were drowned out and dismissed by thousands of supporters: “There is a society of people treating it like the ugliness that it is.”

Byrne seems a bit uncomfortable speaking about himself, but he becomes resolute when discussing the meaning behind his music and his musical influences. The son of a blues drummer, he grew up listening to Johnny Lee Hooker and White Waters before discovering delta blues, Motown, and soul. Lyrically, he finds inspiration in Leonard Cohen. His fondness for Gospel music and congregational singing was encouraged and nurtured by Anúna, a classical Irish chorale ensemble in which he performed before setting off on his own.

This variety helps explain the expansiveness of Hozier’s sound—a stylistic range rivaled only by his impressive vocal range. With vivid songwriting, an ear for melody, and an eye for topicality, Byrne’s latest EP (also named Take Me To Church) is a cohesive collection of tracks that each stand on their own.

Byrne’s new EP, From Eden is due out at the end of March, and he’s got a full-length release in the cards for the fall. He’s just wrapping up a short hop in the States, his first, for South by Southwest and performances in New York and Los Angeles, before returning to Europe for more touring. He intends to make it back here before too long. His songs have already resonated with audiences–his American shows have been sellouts and Hozier is well on his way to becoming a household name. “I am very excited,” he says. “It is kinda strange to me. I don’t know what to expect.”

Still he hopes the song that helped him get here and the popularity of the video causes viewers to take homophobic discrimination seriously. “Just to think about the fact that there is latent homophobia or hatred, however small or however tolerated is something that should be recognized,” he says. “Even if nothing else, sometimes it is as simple as someone watching something that makes them uncomfortable and having to face that fact–I hope they challenge themselves to think about that.”