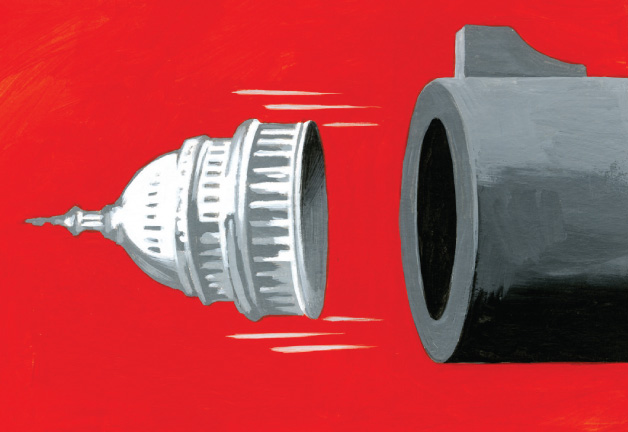 Last week, Colorado state Rep. Jared Wright, a Republican, left his handgun in a canvas bag in the state capitol—following a hearing on rolling back concealed carry laws. Wright, a former police officer, told the Denver Post he will stop carrying his revolver to committee meetings. He wasn’t the first public servant in recent memory to forget, shoot, drop, or otherwise unintentionally mishandle a firearm:

2014
Kentucky state Rep. Leslie Combs, a Democrat, accidentally fires a gun in her capitol office while attempting to empty it in front of another lawmaker.

2013
West Virginia Del. Kelli Sobonya drops her handgun in a meeting with Gov. Earl Ray Tomblin. “I said, ‘Hey, Governor, you don’t have to worry; I have my permit,'” she tells the Charleston Daily Mail.

Texas state Rep. Drew Darby is arrested at an Austin airport after a loaded .380 Ruger is found in his carry-on bag.

2012
New Hampshire state Rep. Kyle Tasker explains that he dropped one of his two handguns on the floor of the capitol because he was “loopy” from just donating blood.

2011
More butterfingered Granite State Republicans: State Rep. George Lambert drops his holstered gun outside the statehouse. State Rep. Paul Mirski drops his firearm during a meeting and doesn’t get around to picking it up until the event adjourns.

2008
Oklahoma state Rep. Sally Kern is caught bringing a loaded handgun into the capitol in her purse. “As soon as my purse went through the scanner and the uh, gentleman there said, ‘Representative Kern,’ I went, ‘Aw, I forgot!,'” Kern tells a local news station. It’s the second time in two months.

2007
An aide to Democratic Virginia Sen. James Webb is arrested for carrying his boss’ loaded gun into a Senate office building.

2006
Virginia Del. Jack Reid fires his handgun in his office as he’s trying to remove the clip. The round strikes a bulletproof vest hanging on a door.

Vice President Dick Cheney hits a hunting companion in the face with birdshot while hunting quail in Texas.

2002
A pistol goes off as it’s being handed to Georgia Rep. Bob Barr at a reception. Explains the lobbyist who passed the gun, “We were handling it safely, except that it was loaded.”