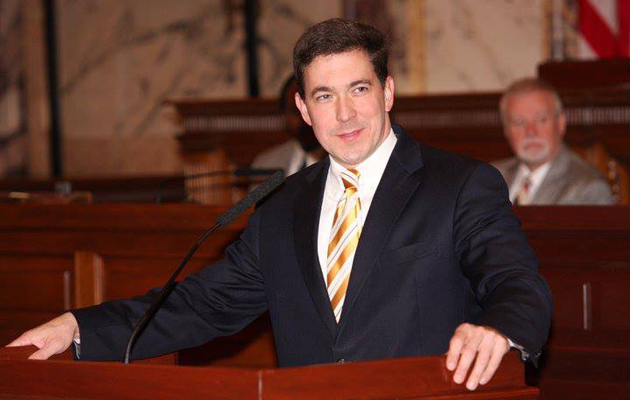 In a promotional segment for his Christian conservative radio program, Right Side Radio, Mississippi Republican Senate candidate Chris McDaniel blamed rising gun violence on a “hip-hop” culture that “values rap and destruction of community values more than it does poetry.”

The comments were featured in a teaser for the program, which McDaniel hosted from 2004 to 2007, and recently flagged by the politics blog Darkhorse Mississippi. McDaniel, a state senator who has the backing of prominent tea party and conservative groups, is challenging Sen. Thad Cochran in June’s Republican primary.

“The reason Canada is breaking out with brand new gun violence has nothing to do with the United States and guns,” McDaniel said in this promotional sampler for his syndicated radio show. “It has everything to do with a culture that is morally bankrupt. What kind of culture is that? It’s called hip-hop.”

McDaniel went on to conflate rap music with failing schools and broken communities. “Name a redeeming quality of hip-hop. I want to know anything about hip-hop that has been good for this country. And it’s not—before you get carried away—this has nothing to do with race. Because there are just as many hip-hopping white kids and Asian kids as there are hip-hopping black kids. It’s a problem of a culture that values prison more than college; a culture that values rap and destruction of community values more than it does poetry; a culture that can’t stand education. It’s that culture that can’t get control of itself.”

The segment also featured a riff from McDaniel on the merits of torture. He specifically noted the waterboarding of suspected 9/11 mastermind Khalid Sheikh Muhammad was an effective intelligence-gathering tool:

He wasn’t gonna talk, was he? Unless something happened. That’s right, something did occur: It’s called waterboarding. Waterboarding is something they do to people to make them talk. It is torture, to the liberals. It is a fairly humane form of torture, if you could classify it as such. Here’s what happens: You make the guy believe he’s going to drown. And as you know it’s a pretty strong fear—drowning. Well this guy, Muhammad, he spoke all day. He spoke all night. Anything and everything, just let me avoid the waterboard. Because you see Mr. Muhammad here apparently had a problem with drowning. And that worked.

Muhammad, who was waterboarded 183 times before the practice was discontinued, did talk, but not always truthfully. In a review of the interrogation program in 2009, the CIA inspector general “could not in good conscience reach a definitive conclusion about whether…the enhanced techniques in the aggregate really worked.”

Cochran surprised many political observers by announcing he would seek a seventh term last month. A November poll from Public Policy Polling gave Cochran a 44–38 edge over McDaniel in the Republican primary. The winner of that race is likely to end up in the Senate; the last Democrat to win a Senate contest in Mississippi was John C. Stennis, in 1982.