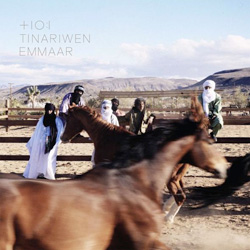 In keeping with its origins, the renowned North African band Tinariwen has moved yet again: this time to Joshua Tree, California. The group, composed of Tuareg nomads from Mali, left the desert dunes of the Sahara to escape from regional violence. Despite the relocation to American desert country, the music will sound familiar. The gritty, rocking guitar in “Chaghaybou,” and the weaving vocals over soft hand drums you’ll hear in the songs “Sendad Eghlalan” and “Timadrit In Sahara” are unmistakable, and an ideal soundtrack for your own wanderings.

Like their last recording, which featured members of TV on the Radio and Wilco, and which won Tinariwen a Grammy, Emmaar includes guest artists such as Red Hot Chili Peppers guitarist Josh Klinghoffer, Matt Sweeney from Chavez, Nashville fiddler Fats Kaplin, and the poet Saul Williams. “We wanted something which sounded natural and live” says multi-instrumentalist band member Eyadou Ag Leche. Indeed, the tracks on Emmaar have the same organic vibe as those produced thousands of miles away. By all accounts the band has succeeded: With this album, the members of Tinariwen have again proved they are as at home on the global music stage as in the deserts of Mali.