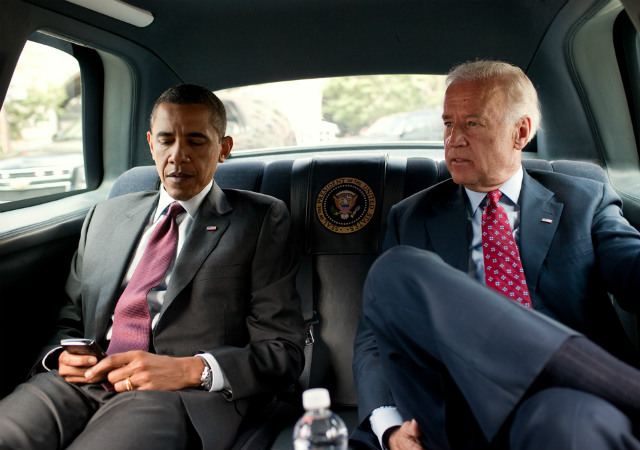 Four years ago, in his inaugural State of the Union address, President Obama famously shamed the Supreme Court’s five conservative justices for their decision in Citizens United v. Federal Election Commission. The court, Obama said, “reversed a century of law that I believe will open the floodgates for special interests—including foreign corporations—to spend without limit in our elections.” Democratic lawmakers, activists, operatives, and donors piled on, condemning the ruling as “scandalous,” a “disaster,” and “bad for American democracy.” When a subsequent court decision, nodding to Citizens United, opened the door to super-PACs, a new breed of political committee that can raise and spend unlimited amounts of cash, Obama branded them “a threat to our democracy.”

The Obama of 2010 might not recognize the Democratic Party of 2014.

In the intervening years, Obama and his fellow Democrats embraced big-money politics. Democrats formed super-PACs to defend the presidency, gain seats in the House of Representatives, and preserve their majority in the Senate. Obama is the first president in history to utilize a tax-exempt 501(c)(4) group, which can accept unlimited sums from anonymous donors, to promote his policy agenda. (Organizing for Action, the president’s nonprofit, chose to voluntarily disclose its 2013 donors.) And with an eye toward the 2016 presidential race, Democratic operatives have gone to work for various super-PACs mounting a campaign-in-waiting for presumed front-runner Hillary Clinton. If Democrats hate Citizens United on paper, they love it in practice.

As president, Obama has acted on campaign pledges to crack down on Washington’s revolving door by restricting lobbyists’ access to his administration and banning lobbyists from bundling donations for his reelection campaign. His administration posts the White House visitor logs, gathers government ethics rules online, and advocated for the passage of the DISCLOSE Act, which would’ve increased transparency of politically active nonprofit groups but failed after Republicans repeatedly filibustered it. White House spokesman Eric Schultz says Obama has taken “historic steps to reduce the corrosive influence of money in politics.” The administration’s goal, Schultz added, “has been to reduce the influence of special interests in Washington—which we’ve done more than any administration in history.”

Campaign finance experts disagree. They say Obama has made scant progress on enacting serious campaign finance reform of any kind, such as overhauling the broken Federal Election Commission or revamping the presidential public financing system that Obama opted out of in 2008 and 2012. “What has Barack Obama done for the cause of campaign finance?” says Rick Hasen, a campaign finance expert at the University of California–Irvine law school. “I would say that he has been one of the most damaging presidents we’ve had on this issue.”

The story of the Democratic Party’s reversal on Citizens United is best told through the story of one group in particular: Priorities USA Action, the flagship Obama super-PAC during the 2012 presidential campaign. In a two-year span, Priorities evolved from a floundering super-PAC and Beltway punch line into a respected organization on its way to becoming part of the Democratic firmament like the Center for American Progress think tank. Priorities’ story illustrates how Democrats have accepted, if not thrived under, the new rules of post-Citizens United politics.

“What has Barack Obama done for the cause of campaign finance?” asks UC-Irvine’s Rick Hasen.

When Priorities USA launched in April 2011, few donors wanted anything to do with it. Its founders—Bill Burton, already a veteran Democratic spokesman at the tender age of 33, and Sean Sweeney, a former chief of staff to Rahm Emanuel—had never fundraised a day in their lives. More problematic was the president’s position on super-PACs. Obama not only didn’t approve of Priorities; he and his campaign team mocked it. Of the 50 people Burton and Sweeney invited to their super-PAC’s first New York meeting in June 2011, 4 showed up.

Priorities hit rock bottom in January 2012, raising a paltry $58,816. By contrast Restore Our Future, the pro-Romney super-PAC, raked in $6.6 million. At the time, Priorities’ small staff didn’t think about whether its employer would stick around for future elections. They worried more about getting their new venture off the ground in the first place.

A $2 million donation in May 2011 from the movie mogul Jeffrey Katzenberg had lent Priorities some legitimacy in the donor world, but the group’s big break didn’t come until Obama reversed course in February 2012 and gave Priorities his blessing. Jim Messina, the president’s campaign manager, said the Obama campaign could not “play by two sets of rules” and “unilaterally disarm” when Mitt Romney’s campaign and its allies, including Karl Rove’s American Crossroads and Crossroads GPS organizations and Charles and David Koch’s political network, aimed to spend more than $1 billion to defeat Obama. In the eyes of the president’s donors, Priorities was anathema; now, with the president’s imprimatur, the money spigot opened. Priorities’ began raking in seven- and eight-figure sums each month. Even George Soros, a longtime funder of campaign finance reform efforts, chipped in a million bucks.

Priorities made its mark with a series of ads focusing on Romney’s time at the private-equity firm Bain Capital. The ads helped define Romney as a heartless, job-killing capitalist, a message that resonated in, among other places, Ohio, a battleground state filled with unemployed and underemployed blue-collar workers. GOP pollster Frank Luntz reportedly said Priorities’ most memorable ad, “Stage,” “alone has killed Mitt Romney in Ohio.”

By Election Day, Priorities was being hailed as an integral piece of Obama’s ruthlessly effective campaign. The experience was the opposite of what unfolded in 2004, when Soros and other Democratic donors plowed tens of millions of dollars into outside groups only to watch John Kerry fall short of ousting President George W. Bush. This time, Burton, Sweeney, Katzenberg, and the Priorities team could say their money made a real difference, an achievement made even sweeter by all the money wasted by Rove and the Kochs.

Moments after CNN called the race for Obama on November 6, Katzenberg called Paul Begala, who as a consultant to Priorities had gotten to know the movie mogul. Katzenberg, as I reported last May, thanked Begala for the work he and the Priorities team had done. Then he asked, “So what’s next on the agenda?”

He wasn’t kidding. Katzenberg was Priorities’ angel investor, and he had no intention of letting the group go to rust. Katzenberg and his Hollywood-based political adviser, Andy Spahn, helped drive the discussion about how to keep Priorities around, with an eye on the 2016 presidential election. (Spahn declined to comment, directing questions to Priorities USA.)

Katzenberg, the new Democratic kingmaker, knows all too well what happens when the Democrats fail to plan ahead during the final term of a Democratic president. Katzenberg raised funds for Bill Clinton in the 1990s, but then watched with dismay as Vice President Al Gore fell short in his presidential bid. To prevent a repeat of Gore 2000, Priorities could lay the groundwork for 2016 well before the campaign starts in earnest so that the White House stays in Democratic hands.

Following the 2012 campaign, Priorities, now officially backing Hillary Clinton, has enlisted a dream team of Democratic operatives who’ve worked for both the Clintons and Obama. Jim Messina will co-chair Priorities’ board of directors; Buffy Wicks, a former field director for Obama, recently joined as executive director; and Jonathan Mantz, Hillary Clinton’s 2008 finance director, will fundraise. According to the New York Times, other Priorities board members include Media Matters for America founder David Brock, EMILY’s List president Stephanie Schriock, and former Clinton White House aide Maria Echaveste. Installing those Democratic stalwarts on its board allows Priorities to coordinate with left-leaning allies, just as it did in 2012 working with the Service Employees International Union, League of Conservation Voters, and Planned Parenthood.

Priorities is the most high profile Democratic super-PAC, but it’s far from the only one. There are Democratic super-PACs devoted to expanding the party’s numbers in the House and Senate; American Bridge 21st Century tracks Republican candidates at public events and digs up opposition research. The AFL-CIO, EMILY’s List, and Planned Parenthood all have their own super-PACs. And as the cost of winning a Congressional race climbs, candidate-specific super-PACs are on the rise, with Democratic and Republican candidates clamoring to get one of their own.

Democrats have also plunged headlong into the arena of dark-money politics, funneling anonymous donations through nonprofit groups. Priorities has an under-the-radar 501(c)(4) nonprofit that raised nearly $11 million in anonymous cash in 2012. And last year, left-leaning nonprofits easily outspent their right-leaning counterparts on statewide and congressional races. (That’s partly attributable to the fact that 2013’s off-year elections were in heavily Democratic states.)

So how do Democrats respond to charges that they’ve flip-flopped on Citizens United and big-money politics? “We want a world without super-PACs. We also want a world without nuclear weapons,” says Priorities spokesman Peter Kauffmann. “But if Mr. Khrushchev’s got nukes, President Kennedy has to have them as well.” Other Democrats, like Jim Messina, say Democrats can’t afford to not use all the tools at their disposal, not with the vast amount of fundraising and spending taking place on the Republican side. And it’s true that Democrats are, when it comes to super-PACs and political nonprofits, still outgunned: 7 of the 10 biggest-spending super-PACs and 9 of the 10 biggest-spending political nonprofits supported Republicans in 2012.

But Obama and his Democratic allies seem to want it both ways: condemning Citizens United but taking full advantage of what it has wrought. “The Democrats are doing just fine under the post-Citizens United regime,” says Hasen, the UC-Irvine law professor. “Now that this door’s open, they’re pushing on it.”