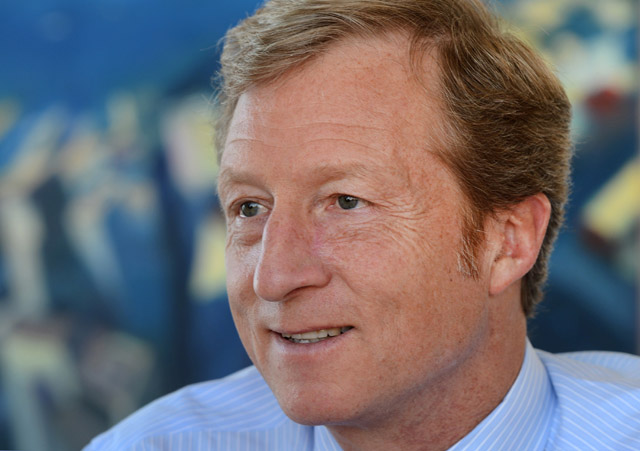 Politico reports that Steyer’s super-PAC, NextGen Climate Action, will run its first wave of TV ads in Virginia this week. NextGen and its consultants are also laying the groundwork for a statewide get-out-the-vote effort this fall targeting Virginians who care about the climate. GOTV efforts are especially important in this year’s Virginia gubernatorial race because it is an off-year election and the year after a presidential race. Voters are following politics less closely, and turnout is expected to be low.

That Steyer would choose the Cuccinelli-McAuliffe race as his next target is no surprise. Cuccinelli, who is currently the state attorney general, is one of the loudest members of the GOP’s chorus of climate change deniers. He has frequently attacked the Environmental Protection Agency’s efforts to curb greenhouse gases, and he led a witch hunt into the research of prominent climate scientist Michael Mann, a professor at Penn State University.

If Steyer’s goal is to use his wealth and today’s lax campaign finance rules to force candidates to discuss climate change and to oust those candidates who don’t take it seriously, then attacking Cuccinelli is a no-brainer. “I would say there’s a very clear choice on this topic between these two candidates, and I think the citizens of Virginia deserve to understand both what the truth is and what the implications of that are,” Steyer told Politico.

While Steyer’s first overt move in Virginia comes in the form of paid television advertising, he told Politico repeatedly that he views get-out-the-vote efforts as a better overall investment, along with digital advertising and other, less-traditional independent expenditure methods.

“Our going-in assumption is that the bulk of what we’re doing is field—is enabling the citizens to literally speak to each other,” Steyer said. Referring to the Prop. 39 fight, he explained: “Our sense in California was that technology enabled a lot of viewers to just skip our ads.”

He added on a wry note: “The other thing that’s true, as I’m sure you know, is the traditional way for consultants to get paid is through a percentage of the TV buy…So it’s like you say, you know, ‘There’s a flood in Afghanistan.’ And they’ll say, ‘We need a bigger TV buy.'”

The billionaire freely acknowledged that he was a newcomer to Virginia, but in a whirlwind tour of Richmond last week, he introduced himself to a number of prominent figures in the state political and clean-energy communities.

Steyer met in Virginia’s capital city Thursday with a collection of climate activists and another group of about 20 energy executives. One of those executives—Mike Healy of Skyline Innovations, who invited Steyer to Richmond in the first place—delivered a letter signed by several colleagues asking that Steyer use his financial firepower in the governor’s race.

The consensus in that meeting, Steyer said, was that the advanced-energy sector could pack a much bigger punch in state politics if it were better organized politically and more deliberate about pushing the message that green policies can translate into jobs. (And, it goes without saying, if a deep-pocketed out-of-state figure would be willing to deliver a nuclear-level strike against a politician like Cuccinelli.)