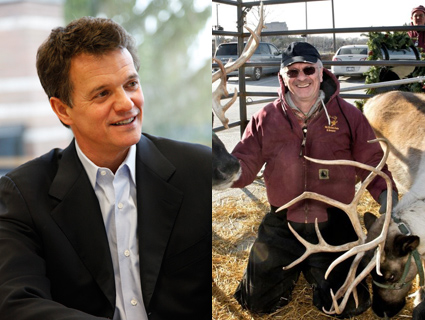 In a year where business-friendly Republicans are lining up to challenge tea party renegades, the GOP primary in Michigan’s 11th District defies political convention. In one corner is freshman Rep. Kerry Bentivolio—a former Santa impersonator and reindeer rancher who was elected almost by accident last fall after the five-term incumbent abruptly quit. In the other is David Trott, a lawyer who has been dubbed the “foreclosure king” of a state in which 38 percent of mortgages are underwater.

“It’s one of the oddest primaries probably in the country,” says Bill Ballenger, a former Republican state senator who runs the site Inside Michigan Politics.

If Bentivolio is Santa, Trott’s political rivals are working to frame the challenger as something closer to Scrooge. “Whether or not we want to make an issue of it, his record is representing most of the major Wall Street banks and kicking people out of homes in the district,” says Bentivolio’s campaign manager, David Wolkinson. “I mean, this is where he made his money.”

Trott’s campaign notes that the candidate has a wide array of business interests, but his financial disclosure forms leave no doubt that foreclosures are where he made his fortune. Through various interconnected concerns, Trott is involved in virtually every aspect of the foreclosure business.

His flagship operation is Trott & Trott, a 500-person law firm founded by his father that is one of the largest foreclosure specialists in the state; its clients are largely lenders, such as Bank of America and Countrywide. Trott & Trott doesn’t personally evict homeowners; it handles the paperwork for banks that do. “It’s what we do; it’s all we’ve ever done,” Trott said in a 2007 TV interview, of his foreclosure work.

He also owns a real estate firm that manages foreclosed properties, as well as a newspaper chain, Michigan Legal News, that banks are required to post foreclosure notices in.

Trott doesn’t just benefit from foreclosures; his firm has pushed to change state law to make it easier for banks to kick people out of their homes. The Michigan Messenger, a now-defunct investigative reporting site, reported in 2009 that Trott & Trott representatives had worked with Republican legislators to rewrite foreclosure reform legislation in order to narrow the window for residents to appeal their foreclosures. The firm directed a request for comment to the Trott campaign, which said in a statement: “Trott and Trott was one of several entities that was asked for input which they gave.”

In 2011, Trott’s law firm sparked a local backlash when it facilitated the eviction of 101-year-old Texana Hollis, whose belongings were unceremoniously deposited in a dumpster. (Hollis’ son had fallen behind on property tax payments and ignored repeated warnings from his bank.) Hollis was eventually allowed to stay in her Detroit home of 58 years after a public outcry spurred Detroit Free-Press columnist Mitch Albom to buy the property through a charity.

So notorious is the Trott brand in southeast Michigan that when activists wanted to protest evictions in 2013, they didn’t set up “Hoovervilles,” the Depression-era encampments inspired by the president—they created “Trottvilles.”

“David’s firm has made a living off of monetizing human misery here in Michigan,” said Curtis Hertel Jr., a register of deeds in Ingham County, just outside the 11th District, who has challenged Trott & Trott in court. “I mean you go through all the different scandals that have happened with the banks, and the robosigning documents, and everything else—these people are on the front lines of that.”

Sandler concedes that Trott’s foreclosure work will be a campaign issue, but says the critique put forth by Hertel, Wolkinson, and others is just faux populism. “Several of Dave Trott’s opponents are not job creators, they’ve never created a job, and the only thing they can do to distract from discussing the economy is use smear tactics,” he says.

The primary comes as Republicans in Michigan are looking to reinvent themselves in the Rust Belt. Kentucky Sen. Rand Paul visited Detroit last month to open a new GOP office aimed at recruiting African American voters. But Bentivolio is an unusual alternative for Republicans turned off by how Trott made his money. The onetime Santa impersonator brought several tons of personal baggage to Washington in his sleigh.

His professional history is rife with controversy. An invitation to appear at the White House with his reindeer in the 1990s was scuttled when a creditor blasted him in the press, citing a $620,000 tab he’d rung up in a failed home-building venture. He filed for bankruptcy after the project flopped and rebounded with a quixotic business raising reindeers for use in Christmas festivals. In a defamation lawsuit against the creditor, Bentivolio admitted that the task of working as a Santa impersonator had begun to get to him. “I have a problem figuring out which one I really am, Santa Claus or Kerry Bentivolio,” he said in a deposition. “All my life I have been told I’m Kerry Bentivolio, and now, I am a Santa Claus, so now I prefer to be Santa Claus.”

In 2011, after returning from a tour in Iraq with the Michigan Army Reserve, he took a job as an English teacher at a local high school. The job was short lived. He parted ways after the school’s administration reprimanded him for telling students his goal was to make each of them cry and that they were “just a paycheck.” He also costarred in a low-budget film in which George W. Bush has direct knowledge of the 9/11 attacks before they happen.

Bentivolio was elected in a fluke. In the spring of 2012, Rep. Thad McCotter (R-Mich.), the district’s five-term incumbent, abruptly dropped out of the race and resigned, after allegations of petition fraud. This left Bentivolio—running as a gadfly with no realistic chance at winning—as the only candidate on the Republican primary ballot. A state senator launched a write-in campaign, but Bentivolio received $500,000 from a super-PAC manned by two libertarian twentysomethings (10 times more money than he had raised) and cruised to victory.

Democrats, who had fielded only token opposition expecting to face the popular McCotter, never put up much of a fight that fall. This time around, Democrats have coalesced around Bobby McKenzie, a former State Department counterterrorism official. He has at least a puncher’s chance: Mitt Romney carried the district by just 4 points in 2012.

Bentivolio’s first term has been mostly uneventful, with a few exceptions. In September, he promised attendees at a GOP event in Birmingham, Michigan, that he would hold a hearing on the government’s use of airplane exhaust (i.e. “chemtrails”) to poison Michiganders and make them more docile. A Bentivolio spokesman later said the proposed hearing had been canceled for lack of evidence. In August, he told a group of constituents that it would be a “dream come true” to file impeachment papers against President Obama—but again backed off, for lack of evidence. “You’re going to become a laughingstock if you’ve submitted a bill to impeach the president,” he said, “because No. 1, you’ve got to convince the press.”

Asked about his calls for impeachment and the chemtrails hearing, Bentivolio’s spokesman said the candidate’s proposals shouldn’t always be taken seriously. “The congressman likes to say there’s three things in Washington you’ll never find—honesty, common sense, and a sense of humor,” Wolkinson says. “He definitely has a sense of humor.”

Still, he’s received the support of the House leadership in his reelection fight. House Speaker John Boehner traveled to Michigan to attend a fundraiser for Bentivolio in August, and Majority Leader Eric Cantor’s PAC gave the freshman congressman’s campaign coffers a $10,000 boost. But for the most part, Bentivolio’s fundraising has been paltry. He’s raised just $39,000. According to the most recent Federal Elections Commission filings, Trott had $450,000 on hand, thanks in part to a $250,000 donation from himself. He also received the maximum donation from billionaire Dick DeVos, whose family has poured big bucks into returning the Michigan GOP to power.

Unlike his rival, Trott has strong connections in GOP fundraising circles. He was a member of Mitt Romney’s Michigan finance committee in 2012, and a donor to the pro-Romney super-PAC Restore Our Future, to which Trott & Trott gave $200,000.

The first poll of the race gave Bentivolio a 19-point lead over Trott, but that was in September before either candidate began advertising.

“Bentivolio may have said some kooky things,” says Ballenger, the former state senator. “He’s done stuff to keep his previous image alive, but if you actually look at his voting patterns, most of the time they’re not totally far-out or weird.” In a race that defies stereotypes, that may be the strangest thing.