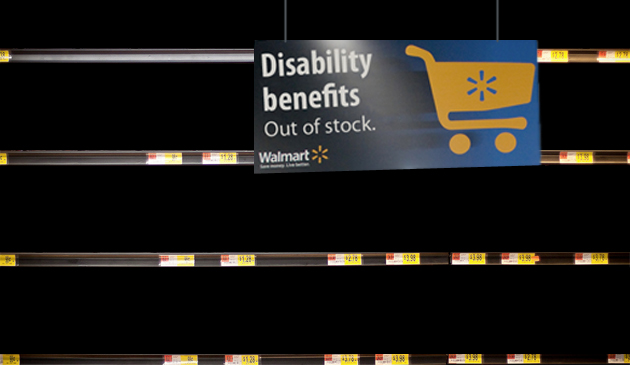 Last week, amidst a deluge of criticism about Walmart’s poverty-level wages, the retail giant announced promotions for 25,000 of its roughly 1.3 million US employees. But although Walmart has raised pay for some of its employees, it is simultaneously fighting to convince the Supreme Court to allow it to more easily avoid paying disability benefits.

Last month, the Supreme Court heard arguments in Heimeshoff v. Hartford Life & Accident Insurance Co. and Wal-Mart Stores, Inc., a case brought by Julie Heimeshoff, a Walmart employee who sued the company and its insurance provider in 2010 for refusing to pay her disability benefits. Heimeshoff worked at Walmart for nearly 20 years, most recently as a public relations manager. About 10 years ago, she was diagnosed with fibromyalgia, lupus, and other chronic pain problems, and in June 2005, the pain became so severe that she had to stop working. Heimeshoff applied for disability benefits and, after a long internal review, her claim was denied. She sued over the denial of benefits less than three years later. That was within the statute of limitations—or so she thought.

When Heimeshoff started working for Walmart, she signed a contract saying that if she were ever denied disability benefits, she could only sue the company for wrongful denial of benefits if she did so within three years of filing her disability claim. But the US government and consumer lawyers say that Walmart’s contract is bunk, because established law stipulates that the clock doesn’t start ticking on those three years until an employee’s claim for benefits is improperly denied. A ruling in Walmart’s favor could make it more difficult for millions of workers—not just people who work for Walmart—to obtain disability benefits.

Walmart’s argument is “crazy,” Arthur Bryant, executive director of the public interest law firm Public Justice, wrote earlier in October. He explained that “every first-year law student learns that statutes of limitations, which set a time limit on how long a person has to sue, don’t start running—can’t start running, as a matter of common sense—until a person suffers a wrong and could actually file a case in court.”

It’s “a fundamental rule of law, established by the Supreme Court…that has been in place for two centuries,” says Matt Wessler, the attorney who argued on behalf of Heimeshoff before the high court. “The only way this can change is where Congress itself says so…Walmart is nevertheless trying to change it itself.”

Ginger Anders, an assistant to the solicitor general for the Department of Justice who also argued in support of Heimeshoff, echoed this, telling the court that Walmart’s disability benefits contract undermines bedrock principles governing how statutes of limitations work.

Walmart did not respond to a request for comment, but in its March brief, the company contends that a number of lower courts have backed its position. And in oral arguments, Catherine Carroll, the attorney for Walmart and its insurance company Hartford, said that if another situation arose in which a Walmart employee couldn’t sue for benefits because the internal denial process took longer than the statute of limitations, Walmart would make an exception for that employee. Chief Justice John Roberts summarized her response: “[Y]our answer to the problems is: Well, don’t worry. If it ever turns into something that’s going to be enforced, we won’t enforce it.” An employee could also sue Walmart anyway, the company contends, and hope that a judge rules that Walmart was being unreasonable in that specific instance.

Several of the justices didn’t appear to find Heimeshoff’s particular situation all that unfair, because, as Carroll explained to the court, Heimeshoff was notified of the statute of limitations period as early as 2006, and she still had a year under her disability plan’s statute of limitations to file her lawsuit after her benefits were denied. Even so, a ruling in favor of Walmart, Wessler says, would have broader implications. It will become much easier for companies to deny benefits to employees by simply dragging out the benefits approval process until the statute of limitations is over or nearly expired. By the time their benefits are denied, Wessler says, the injured person will either no longer be able to sue, or they’ll have so little time to sue that a lawyer might feel too pressed to take the case.

It is already common for companies to game the disability benefits approval process, Wessler says. Employers can draw out the process by asking for medical records that are not pertinent to determining the legitimacy of an employee’s claim, or by compelling an employee to go see a doctor affiliated with the company’s insurance provider (and thus inherently biased against determining that the employee is disabled). A Supreme Court ruling in favor of Walmart’s provision, Public Justice’s Bryant says, “would give it [and other companies] an incentive to make the process as long as possible.” Walmart, in its brief, contends that this notion is “unfounded,” and adds that its insurance provider Hartford did not engage in any delay tactics.

If the high court alters its position on statutes of limitations, it could also open the door to companies that want to try the same thing for other types of claims. “Why not try and start the clock running [early] for discrimination claims, for instance?” Wessler says.

The very first bill that President Barack Obama signed into law addressed a similarly thorny statute of limitations problem. The Supreme Court ruled in 2007 that the time limit within which an employee can bring an equal-pay lawsuit begins on the date that the employer first makes a discriminatory wage decision, not at the date of the most recent paycheck. The 2009 Lilly Ledbetter Fair Pay Act stipulated instead that the statute of limitations for filing a pay discrimination suit resets with each new paycheck reflecting discriminatory pay.

In the Heimeshoff case, the Supreme Court could very well decide that the matter should instead be resolved by the Department of Labor or individual state legislatures. Then again, the high court could take a cue from its 2011 decision in Walmart v. Dukes. In that case, the Supreme Court allowed Walmart to block its female workers’ sex discrimination claims by changing the rules governing class action lawsuits.