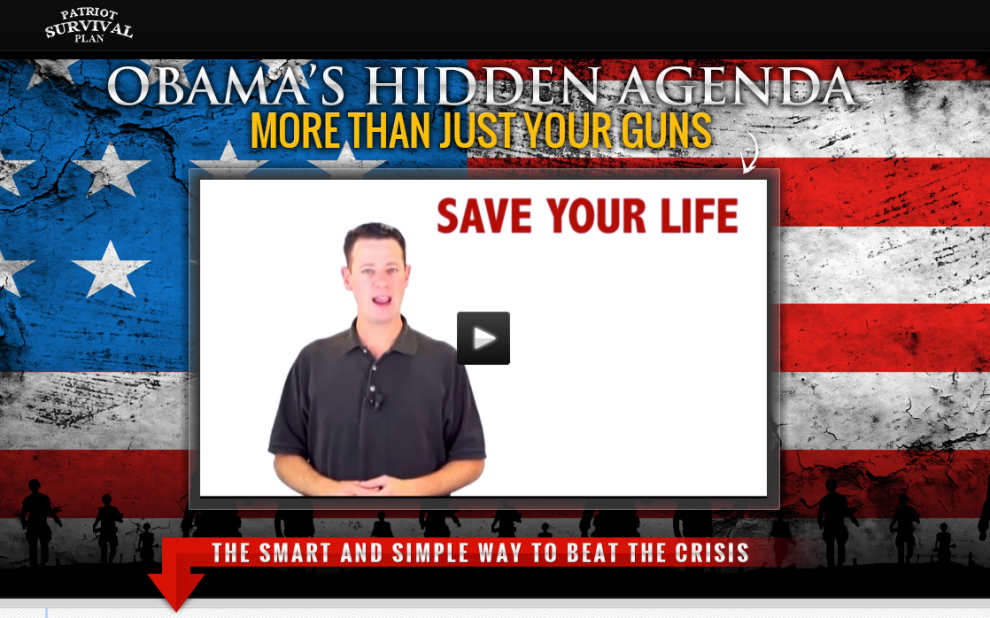 Call it debt ceiling profiteering. With the federal government just days away from defaulting on trillions of dollars in borrowings, survivalists are bracing for chaos. And the $500-million-dollar-a-year “preparedness” industry is flooding the blogosphere with ads for ammunition, gold bullion, antibiotics, freeze-dried food, sling shots, prefab bunkers, and countless other products to help you brave the impending mayhem.

But one company has been particularly aggressive about capitalizing on preppers’ paranoia, particularly those preppers who see Barack Obama as the first horseman of the Apocalypse. Last week, an anonymous email solicitation went out to readers of the conservative news site, GOPUSA.gov. It warned:

There are three hidden signs that Obama
is about to throw you into a FEMA camp.
They’re on his secret agenda.

But once YOU know these three signs…
youre already one step ahead.
You’re in control.

You can beat them at their own game.

Click here to check them out now,
before its too late.

The link leads to a slick marketing website-cum-infomercial for a video called the Patriot Survival Plan, which is also being promoted on popular conservative sites, such as World Net Daily. The infomercial claims that America is about to experience “a crisis unlike any other in history, a catastrophe that will overshadow, Katrina, Pearl Harbor, 9/11, the Great Depression, even the Civil War.” What’s more, this “financial Hiroshima” is “barreling down on us like a freight train in just 10 months or less…Unless you take some very specific steps it’s virtually guaranteed that you will be left penniless, hungry, and fighting desperately for your life.”

What steps are those? The infomercial doesn’t say.

Instead, it delves into a rant about the Federal Reserve, claiming it’s part of plot by greedy bankers to “rig the entire U.S. economy in their favor” by luring the country into a gargantuan debt it can never repay. Worse, this “Massive Ponzi scheme” is about to “come crashing down.” When it does, neighbors will fight each other to the death over a single can of tuna.

But never fear. There’s a “simple yet stunningly powerful method” that will have intruders “running away from your home like scared little girls.” And you can learn it from “the comfort of your own home,” all for a mere $37. Among the skills you will glean through the Patriot Survival Plan video:

For more tips on surviving Armageddon, visit PatriotSurvivalPlan.com’s sister sites: PatriotStockpile.com, where you can pick up a food-hoarding bible for $22; and TruthAboutPrivacy.com, which offers a guide for dodging government surveillance. (The alternative being “living the rest of your life under the surveillance of a drone made just for you, ordered to track you and kill you if you make the wrong move.”) You better act fast, because time is running out!