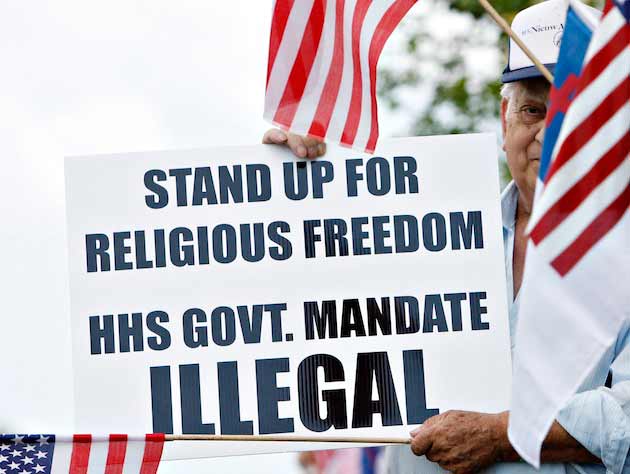 Frank and Philip Gilardi live in Ohio and own produce packing and delivery companies that employ about 400 people. The brothers are also devout Catholics who donate food to religious charities, provide a trailer for the local parish picnic every year, put pro-life bumper stickers on all company trucks—and don’t want their companies’ insurance plans to cover contraception, as the Affordable Care Act (ACA) requires. They’ve sued the Obama administration, arguing that the mandate violates their constitutionally protected religious freedoms.

How? By citing the Supreme Court’s 2010 Citizens United ruling, which suggested that corporations have the same First Amendment rights as human beings to spend unlimited amounts of money to influence elections. The Gilardis’ lawyers—and a host of similar lawsuits—are arguing that if the courts have found that corporations have free-speech rights, they ought to also find that businesses have the right to free expression of religion.

Judges have so far been pretty skeptical of this line of argument, given that the law still defines a corporation as “an artificial being, invisible, intangible, and existing only in contemplation of law.” No court has ever held that a corporation can actually exercise religion, no matter how many bumper stickers are put on its trucks.

The brothers’ case was in federal court last week for oral arguments before the DC Circuit Court of Appeals. The Gilardis were asking a three-judge panel to overturn a decision by a lower court rejecting their request to be exempted from the contraception mandate. The lower court held that for-profit food-packing and trucking companies are secular corporations that are separate entities from the Gilardis, and thus are not exempt from the ACA’s mandate. Their lawyer, Frank Manion of the American Center for Law and Justice, an evangelical public interest law firm, invoked Citizens United repeatedly in oral arguments.

Not all of the companies hoping to avoid paying for contraception have cited Citizen United in their battles, but several have latched onto the decision because of its vast expansion of the rights of corporations. The ruling, which allowed unlimited corporate cash into the election system, also held that the government couldn’t suppress political speech simply “on the basis of the speaker’s corporate identity.” That issue of corporate identity is now at the heart of many of the more than 40 lawsuits filed by for-profit companies challenging the ACA’s contraceptive mandate as a burden on their religious freedom. The plaintiffs come from a wide range of industries that have nothing or very little to do with religion, and include a company that makes scopes and sights for firearms, an HVAC firm, and a car dealership.

Most courts have rejected these for-profit religious rights claims. Take Conestoga Wood v. Sibelius, where lawyers for a 950-employee wood-cabinet-making company owned by Mennonites in Pennsylvania noted that the high court held in Citizens United that the exercise of rights “does not lose First Amendment protection simply because its source is a corporation.” The 3rd Circuit Court of Appeals judges hearing the case ruled against the company, noting that it’s very difficult to figure out how, exactly, an entity that exists mostly on paper can pray, worship, take communion, or experience or express religious beliefs.

The court didn’t dismiss the Mennonite owners’ genuine religious objections to having to provide insurance coverage for Plan B and other forms of birth control, but in handing down its June ruling it concluded that “the law has long recognized the distinction between the owners of a corporation and the corporation itself. A holding to the contrary—that a for-profit corporation can engage in religious exercise—would eviscerate the fundamental principle that a corporation is a legally distinct entity from its owners.”

But a few courts have sided with the for-profit plaintiffs, notably the Denver-based 10th Circuit, which in June found in favor of Hobby Lobby, a chain store with $3 billion in annual revenue and more than 20,000 employees. While the crafting empire, which is by far the largest company to have filed such a claim, hasn’t cited Citizens United in its legal motions, it has so far successfully defended its right to challenge contraceptive coverage on a religious basis. The mixed rulings in the contraception cases will soon force the Supreme Court to revisit the Pandora’s box the justices opened when they granted vast new rights to corporations in Citizens United.

A Supreme Court ruling could have implications that reach far beyond contraception.

Cases like Citizens United show that the conservative majority of the Supreme Court (a majority entirely made up of Catholics) has been willing to move far beyond precedent. Some of the appellate judges hearing the Gilardi brothers’ case in DC last week indicated that they thought a corporation isn’t legally distinguishable from its owners, who do have individual religious freedoms. A Supreme Court ruling that agreed would have implications far beyond contraceptive coverage. For instance, could a corporation avoid complying with gender discrimination laws simply by saying its CEO has religious objections to the employment of women?

One of the judges hearing the Gilardis’ appeal was Janice Rogers Brown, whose nomination by President George W. Bush was held up and nearly filibustered by Senate Democrats who thought her record too radical for the bench. She’s likely to be amenable to their arguments: In 2004, as a member of California’s supreme court, she was the only justice to oppose requiring Catholic Charities to provide birth control coverage to its employees as state law required. While that case admittedly featured a more clearly religiously identified plaintiff, her dissent stated that the charity’s religious rights trumped the rights given to female workers, who, she claimed, could find “more congenial employment” if they didn’t like the policy.

But even Brown seemed to have reservations about granting corporations wide rights of religious freedom when she asked Manion, the lawyer representing the Gilardis, to identify where the line would be drawn: “What’s the limiting principal?” Indeed, she asked, if a shareholder in a corporation has religious beliefs that are offended by some governmental regulation, would that be enough for the company to win an exemption? According to Manion, the answer to her question could be yes, thanks in part to Citizens United.