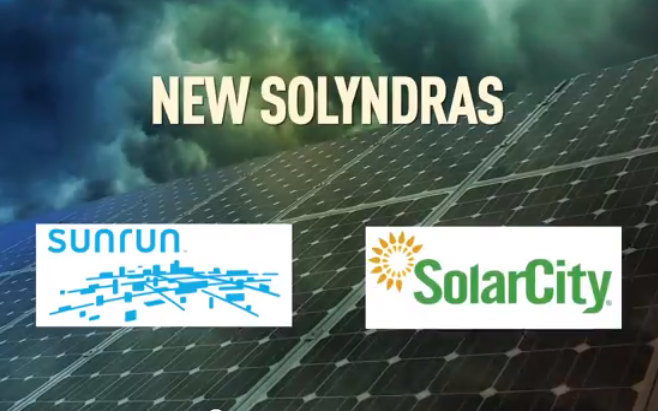 Screenshot of the 60-Plus Association ad "Corporate Welfare."

In recent months, sunny Arizona has been the scene of a shady dark money-fueled battle pitting Arizona’s largest electricity utility against the burgeoning solar power industry. Over the weekend, the fight took an interesting turn: The utility, the Arizona Public Service Company (APS), outed itself as a funder of two secretive nonprofits fueling the anti-solar fight—and revealed that it had funneled its anti-solar money through a political operative associated with the Koch brothers and their donor network.

The fight between APS and the solar industry concerns an issue called net metering. The way net metering works, private consumers who use solar panels can transfer extra energy they generate back to the power grid; the credits they receive for that excess energy, proponents argue, make solar an economical and smart choice for energy generation. APS wants changes to the net metering program that would, in effect, add $50 to $100 a month to power bills of solar users. That additional money, solar companies argue, would make solar power look uneconomical and do serious damage to the industry’s business.

Earlier this year, a coalition of solar companies, including SolarCity and Sunrun, launched TUSK (short for “Tell Utilities Solar won’t be Killed”) and hired Barry Goldwater Jr., the son of the onetime presidential candidate, to fight the net metering changes. TUSK accused APS of being anti-solar and trying to kill the burgeoning solar energy industry. In response, a pair of secretly funded nonprofit groups began running ads on TV, radio, and online calling net metering credits “corporate welfare” and comparing SolarCity and Sunrun to Solyndra, the solar panel company that accepted $500 million in government loans and then went bankrupt.

Here’s one of those anti-net-metering ads by the 60 Plus Association:

The 60 Plus Association, a Virginia-based nonprofit, has received money from the Koch brothers’ donor network. The other nonprofit fighting net metering is Prosper, which was started by former Arizona State House Speaker Kirk Adams. Although the ads run by 60 Plus and Prosper championed the cause of APS, the utility denied that it was funding the groups’ anti-solar ads, saying it was a coincidence the groups had joined the net metering fight.

Now, APS has changed its tune. The utility told the Arizona Republic that it had in fact donated to both groups. What’s more, APS told the Republic that it had given that money through Sean Noble, a political consultant described in a recent Huffington Post story as “the wizard behind the screen” for the Koch donor network’s activities in 2012. “We needed to respond to these ridiculous assertions that we do not support solar,” John Hatfield, an APS spokesman, told the Republic. (Noble no longer appears to be in the good graces of Kochworld: The Huffington Post story reported that he had fallen out of favor with Charles and David Koch and their donor network. “Noble has had his wings clipped,” one Republican operative is quoted as saying.)

The Arizona Corporation Commission could vote within weeks on whether to accept or reject the net metering changes backed by APS, or to side with the solar industry. What the commission decides could have major ramifications for the renewable energy industry in the southwest. Expect to see plenty more dark money flying around in the run-up to that vote.