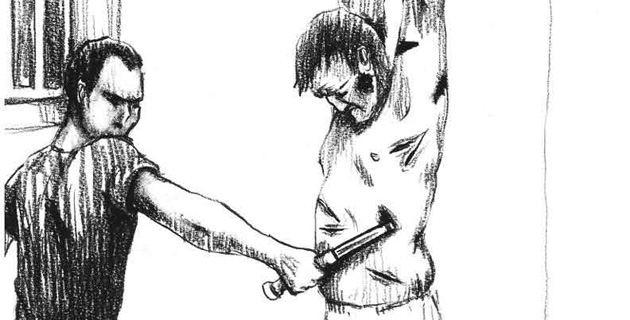 A sketch of a detainee being hung from the ceiling by his wrists and beaten, a common torture technique in Syria.© 2012 <a href="http://www.hrw.org/news/2012/07/03/syria-torture-centers-revealed">Human Rights Watch</a>. All Rights Reserved.

For the last month, Washington has been tying itself in knots over how to respond to the Syrian government’s alleged use of chemical weapons. The Syrian people, meanwhile, are being subjected to ever-graver atrocities, most having nothing to do with poison gas. A new report from the United Nations Commission of Inquiry on Syria illuminates the increasingly brutal tactics that the country’s government—and, to a lesser degree, rebels—are deploying against civilians, from electrocution and rape to enlisting medical professionals to help torture hospitalized detainees. Significantly, while the report focuses on the commission’s findings from mid-May to mid-July and doesn’t cover the August chemical-weapons attack near Damascus, it concludes that both sides are guilty of war crimes and also accuses pro-government forces of crimes against humanity.

Whether the international community will do anything to curb the escalating brutality is an open question, though Thursday’s meeting between Secretary of State John Kerry and Russian Foreign Minister Sergey V. Lavrov may provide some answers. If the two sides can come together and craft an agreement to secure Syria’s chemical-weapons stockpile, perhaps the international community can also find common ground on other measures to protect civilians—and hold Syria’s war criminals to account.

Below is a roundup of atrocities laid out in the UN report.

Torture: “We made them suck their own blood off the floor.”

The media and human rights groups have documented a raft of brutal torture methods deployed by government forces, including electrocution; beatings with batons, cables, and whips; mock execution; burning detainees with battery acid, and ripping out facial hair. A former Syrian intelligence officer who defected to Turkey described similarly cruel techniques in an interview with CNN last year saying, “We took their fingernails out with pliers and we made them eat them. We made them suck their own blood off the floor.”

The UN report exposes some forms of torture that had not previously been documented in Syria, including simulated drowning and prolonged confinement in “squatting cells,” where detainees can’t stand upright or lie down. According to the report, “One detainee was held in such conditions for 10 months, beaten daily, suspended by his wrists for 17 days, burned with cigarettes, and subjected to electric shocks.” The United Nations also found that medical professionals in Syrian military hospitals were involved in torturing hospitalized detainees, some of whom died of torture-related injuries.

At times, rebel forces have resorted to torture, too. Liwa Asifat al-Shamal, an anti-government faction north of Allepo, runs a 300-person prison where, according to the UN, detainees are stuffed in roughly four-foot holes and covered with sheet metal for two days at a stretch. Other factions have been known to use the “Dulab” method, which involves cramming the victim’s legs and head inside a car tire and beating him with sticks, cables, or other objects.

Sexual violence: A Damascus nurse “was threatened with gang rape if she failed to reveal whom she was treating.”

According to the UN, forces loyal to Syrian President Bashar al-Assad routinely rape or threaten to rape women, men, and children whom they suspect have ties to rebels—usually during raids, at checkpoints, and in detention centers. One female detainee interviewed by the UN commission was forced to perform oral sex during interrogations, while another was told her children would be killed if she didn’t have sex with her captors. The threat of rape is also used in intelligence gathering. According to the UN report, two women held in separate Damascus prisons “were told by their interrogators that their daughters would be raped if they did not confess. A nurse held at a police station in Damascus was threatened with gang rape if she failed to reveal whom she was treating.”

Disappearances: One former detainee recalls being rushed by “dozens of women thrusting photographs of their male relatives” upon his release.

Disappearances have “risen exponentially” since the Syrian conflict began, a trend that has sewn terror among the civilians, according to the United Nations. What’s more, families who try to find missing relatives risk the same fate. Often, a family’s only hope of getting information about a disappeared relative is from other recently released detainees. (One man who had been detained by a government intelligence service told investigators that he was rushed by “dozens of women thrusting photographs of their male relatives” upon his release.) The UN report also notes that desperation of these families has made them targets for extortion: “Some families pay bribes to those who—often falsely—claimed they could provide them information.”

Massacres: Videos showed “bloodied and tangled bodies of women and children, some of them mutilated or partly incinerated.”

Contrary to claims from the Assad regime, which has blamed rebels for many of the atrocities, the UN commission found that pro-Assad forces were responsible for at least 8 massacres. Among the bloodiest was the assault on the Damascus suburb of Jdeidat Al-Fadel. In April, government forces shelled the area relentlessly, while snipers stationed along the roads out of town mowed down civilians trying to escape. The following month, the government staged its infamous raid on the Sunni villages of al-Bayda and Baniyas and slaughtered hundreds more civilians. Anti-regime activists captured video of the aftermath, which according to the BBC showed “bloodied and tangled bodies of women and children, some of them mutilated or partly incinerated.” In other cases, government forces deliberately shelled hospitals, killing medical staff, along with sick and wounded civilians.

Rebel forces have also carried out at least one massacre, according to the UN. In mid May, a rebel militia, which included Sunni extremists, stormed the village of Hatla and battled pro-government Shiite fighters. Afterward, they stalked through the village executing Shiite civilians, including women and children, and burning down homes. A video of the raid, which was posted online, showed rebel fighters waving the black Salafi flag and chanting, “This is the Shia, this is the Shia carcass, this is their end.”