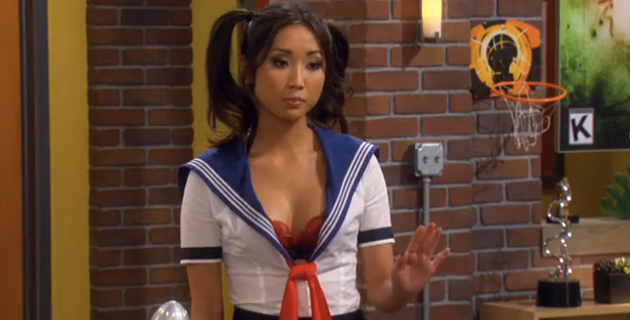 “Well, you’re lucky your dads are American; my dad beat me with a math book ’til I was 16,” says Veronica, an Asian American character (played by Brenda Song) on the upcoming Fox sitcom Dads. The new series (executive produced by Seth MacFarlane of Family Guy, American Dad!, and Ted fame) premieres on September 17, but it has already generated controversy for its comic portrayal of Asian Americans and the Chinese. The show focuses on two founders of a video game company, and how they deal with their intrusive fathers. Comedy supposedly ensues, some of it at the expense of Asian folk.

In the pilot episode, the main characters (played by Seth Green and Giovanni Ribisi) insist that Veronica dress up like a “sexy Asian schoolgirl”—one who giggles like a Japanese teenage stereotype—in order to impress a group of Chinese investors. Chinese people are mocked and declared untrustworthy. The “Asian men have tiny dicks” stereotype is gleefully deployed. The term “Oriental” is used because…funny. And it doesn’t help that Dads co-creator Alec Sulkin once tweeted, “If you wanna feel better about this earthquake in Japan, google ‘Pearl Harbor death toll.'” Sulkin sent this tweet on March 11, 2011, the day a tsunami struck Japan and killed thousands. None of the victims, Japanese or otherwise, was ever implicated in the plot to bomb Americans in the 1940s. (Sulkin soon deleted the comment and apologized via tweet.)

Full disclosure: I am indeed of Asian descent—my parents were born in Bangkok, and I was born in Washington, DC. I rarely have a problem laughing at jokes that invoke Asian/Asian American stereotypes, so long as they are funny and/or have something wise to say. If you’d like my personal opinion of Dads, I’d say that the real problem does not lie with any ethnic or racial stereotypes, but with the fact that it is unoriginal and often a painfully unfunny, lazy waste of production space.

As you can guess, the Dads material pissed off some people. Following calls for the network to reshoot the problematic portions of the pilot, Fox entertainment chairman Kevin Reilly and COO Joe Earley wrote a letter defending the program; they did not indicate any plans for reshooting scenes. “You will see that Brenda Song’s character is a strong, intelligent, empowered young woman who basically runs the company, and who almost always gets the upper hand on the guys,” Reilly and Earley wrote. “This is a show that will be evocative and will poke fun at stereotypes and bigotries…Everyone involved with Dads is striving to create a series with humor that works on multiple levels and ‘earns’ its audaciousness. That said, we do recognize comedy is subjective, and we may not be able to please everyone, all the time.”

Some advocates aren’t satisfied with the response. “They say it gets better in future episodes. Well, okay, let’s see them,” Guy Aoki, the founding president of the Media Action Network for Asian Americans, tells Mother Jones. MANAA has roughly 400 members, and is part of a multiethnic coalition (which includes the NAACP) that meets with network executives once a year to discuss race and television. “They have succeeding episodes in the can, and we don’t want to wait until September to see them,” he says. (According to Aoki, Fox has yet to respond to his request.)

“If I were a producer on that show, I’d say we should reshoot this—and we should give this [Chinese] guy a big dick!”

After a recent panel discussion on Dads, Aoki attended a mixer where he chatted with more Fox executives. He says that others at the network share his desire to have more sitcoms that challenge ethnic and racial stereotypes, rather than simply regurgitate them. “There was another Fox producer there…who told me, ‘You know what? If I were a producer on that show, I’d say we should reshoot this—and we should give this [Chinese] guy a big dick!'”

Perhaps the thing that troubles Aoki the most about Dads is Sulkin’s creative involvement. “That tweet isn’t something I think he should be allowed to live down,” he says. “Read the tweet, and you tell me he doesn’t have a grudge against the Japanese. Maybe he has a grudge against Chinese people, too!”

TV shows associated with Seth MacFarlane have (as does MacFarlane himself) a long record of generating controversy with political incorrect content. Family Guy—MacFarlane’s flagship series that both Dads creators have written for—is certainly no stranger to employing tired Asian stereotypes in the name of silly humor. The series has been called out by GLAAD and others for airing “offensive” and “idiot” content about transgender people. Sarah Palin and Bill O’Reilly criticized Family Guy and MacFarlane for an episode in which a female character with Down syndrome identifies her mother as “the former governor of Alaska.” (Palin’s son, Trig, has Down syndrome.) And when MacFarlane hosted the Oscars earlier this year, he made what was widely interpreted to be a pointless rape joke about Roman Polanski and a Jack Nicholson orgy. During his Oscar ceremony gig, he also performed his “We Saw Your Boobs” song, in which he recited a list of famous actresses who’ve gone topless in film; a few of the characters mentioned were raped in their referenced film, and critical observers took note.

Whether Dads offends your sensibilities or not, the series fits a pattern. (MacFarlane did not respond to Mother Jones‘ multiple requests for comment.)

“We are the one group that can get picked on and people think they can get away with it,” Aoki says. “People are afraid of offending black people, but they aren’t afraid of angry Asian people. And that’s why this stuff happens.”

Here’s the trailer for Dads, which features much of the controversial material seen in the pilot. Judge for yourself: