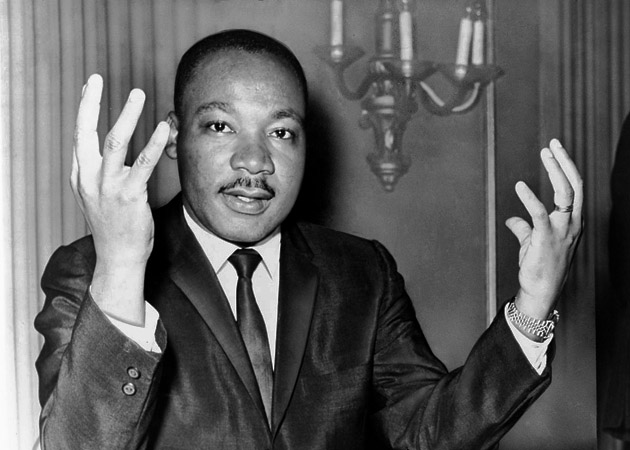 Martin Luther King Jr.’s “I Have a Dream” speech at the 1963 March on Washington—the 50th anniversary of which is being commemorated this week—marked a high point in US history. It was a soaring moment in which the the soul of the civil rights movement was bared to the nation, as King bravely recognized the daunting obstacles to progress but expressed unbound optimism that justice would ultimately reign. There was, though, a dark side to the event, for it triggered an ugly and brutal reaction within one of the most powerful offices of the land. In response to King’s address, J. Edgar Hoover, the omnipotent FBI director, intensified the bureau’s clandestine war against the heroic civil rights leader.

For years, Hoover had been worried—or obsessed—by King, viewing him as a profound threat to national security. Hoover feared that the communist conspiracy he was committed to smashing (whether it was a real danger or not) was the hidden hand behind the civil rights movement and was using it to subvert American society. He was fixated on Stanley Levison, an adviser to King who years earlier had been involved with the Communist Party, and in 1962 the FBI director convinced Attorney General Robert Kennedy to authorize tapping the business phone and office of Levison, who often spoke to King. Then Hoover, as Tim Weiner puts it in his masterful history of the FBI, Enemies, began to “bombard” President John Kennedy, Vice President Lyndon Johnson, Bobby Kennedy, and leading members of Congress with “raw intelligence reports about King, Levison, the civil rights movement, and Communist subversion.” Hoover’s priority mission was to discredit King among the highest officials of the US government. Though King scaled back his contacts with Levison—after both RFK and JFK warned King about associating with communists—Hoover kept firing off memos, Weiner notes, “accusing King of a leading role in the Communist conspiracy against America.”

The August 1963 march, which captured the imagination of many Americans, further unhinged Hoover and his senior aides. The day after the speech, William Sullivan, a top Hoover aide, noted in a memo, “In the light of King’s powerful demagogic speech…We must mark him now, if we have not done so before, as the most dangerous Negro of the future in this Nation from the standpoint of communism, the Negro, and national security.” Six weeks later, pressured by Hoover, Bobby Kennedy authorized full electronic surveillance of King. FBI agents placed bugs in King’s hotel rooms; they tapped his phones; they bugged his private apartment in Atlanta. The surveillance collected conversations about the civil rights movement’s strategies and tactics—and also the sounds of sexual activity. Hoover was enraged by the intelligence about King’s private activities. At one point, according to Weiner’s book, while discussing the matter with an aide, an irate Hoover banged a glass-topped desk with his fist and shattered it.

Hoover did not let up. A little more than a year after the march, after King had been awarded the Nobel Peace Prize, Hoover told a group of reporters that King was “the most notorious liar in the country.” But the FBI’s war on King was uglier than name-calling. Weiner writes:

[William Sullivan] had a package of the King sex tapes prepared by the FBI’s lab technicians, wrote an accompanying poison-pen letter, and sent both to King’s home. His wife opened the package.

“King, look into your heart,” the letter read. The American people soon would “know you for what you are—an evil, abnormal beast…There is only one way out for you. You better take it before your filthy, abnormal fraudulent self is bared to the nation.”

The president [Lyndon Johnson] knew Hoover had taped King’s sexual assignations. Hoover was using the information in an attempt to disgrace King at the White House, in Congress, and in his own home.

Worse, it seems the FBI was trying to encourage King to kill himself.

As the March on Washington is remembered five decades later, it should be noted that King’s successes occurred in the face of direct and underhanded opposition from forces within the US government, most of all Hoover, who did not hesitate to abuse his power and use sleazy and legally questionable means to mount his vendetta against King.

Today, the FBI’s headquarters in downtown Washington is officially called the J. Edgar Hoover FBI Building, named after the paranoid chief who hounded King and did all he could to thwart the civil rights movement. In recent years, critics have proposed erasing Hoover’s name, but the headquarters has not been de-Hoovered. Late last year, it was reported that the FBI offices, which have come into disrepair, might soon be torn down, with a new HQ constructed elsewhere in the Washington area. If so, it would be fitting that Hoover be hauled off with the rubble. After all, there’s a good reason why Americans today remember and celebrate the words and actions of King, and why Hoover’s foul and un-American campaign against King remains in the shadows of history.