Ever since the Martin Luther King Jr. memorial was unveiled last year, it’s been lambasted for paraphrasing a famous quote of King’s on its north side. The Washington Post explains:

But after the architect and the sculptor thought the stone would look better with fewer words, a shortened version was put on, composed of just 10 words with a heavy staccato beat. It was no longer a conditional statement; it was a flat assertion: “I was a drum major for justice, peace and righteousness.”

Today, Interior Secretary Ken Salazar ordered the quotation to be corrected, but ever since I first heard about this I wondered just why the quote had to be so badly shortened in the first place. Did the original really not fit? That’s ultimately an aesthetic judgment, since obviously the carved letters could be made small enough to make room for just about anything. But what if the letterforms were roughly the same size as the ones currently on the monument? As a public service, the photoshopped image below shows what it would look like — though I still had to chop off the final sentence to get it all in. Now you can decide for yourself. 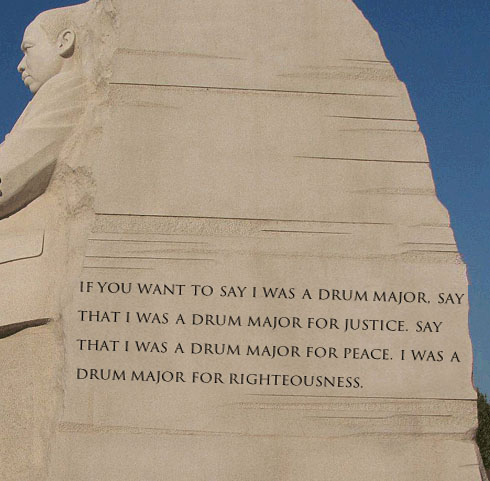