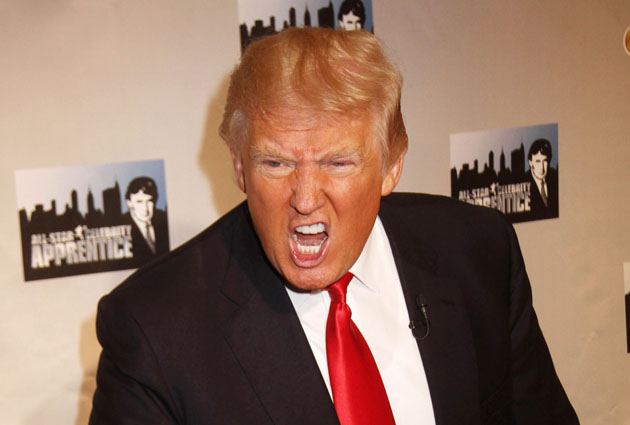 Last Saturday, New York Attorney General Eric Schneiderman announced that he was filing a lawsuit against real estate mogul and hair victim Donald Trump, alleging that his Trump University real-estate training program had engaged in “persistent fraudulent, illegal and deceptive conduct.” The charges claim that Trump U, which is not licensed as an actual school, had promised that “Donald Trump’s handpicked instructor” would share his investing secrets, but more often left its “students” with diminished savings or tens of thousands of dollars in debt. Instead of the savvy investment advice and contact with willing and interested financial backers, students were run through a series of increasingly expensive seminars that mostly served to cajole them into signing up for the next seminar.

According to Schneiderman, more than 5,000 people paid Trump University some $40 million, a quarter of which went straight to Trump himself. “Mr. Trump used his celebrity status and personally appeared in commercials making false promises to convince people to spend tens of thousands of dollars they couldn’t afford on lessons they never got,” Schniederman said in a press release. In the filing, he accuses Trump University of “deceptive acts and practices,” false advertising, “operating an unlicensed private school,” refusing to provide mandated refunds, and other misdeeds.

Here are the lawsuit’s nine most damning allegations:

2. The Donald was a no-show: “Trump University speakers repeatedly insinuated that Donald Trump would appear at the three-day seminar, claiming that ‘he is going to be in town’ or ‘often drops by’ and ‘might show up’ or had just left, or baited students with the promise of a ‘surprise’ or a ‘special guest speaker.’ As students later discovered, these claims were untrue. Rather than being photographed with Donald Trump, they were offered the chance to have photos taken with a life-size photo of Donald Trump.”

3. Trump U rigged its course ratings: Before the suit was filed, Trump pushed back preemptively, starting a website to make his case. “Trump University has a 98% approval rating,” the site reads, “So why is New York Attorney General Eric Schneiderman wasting millions in taxpayer money going after them?”: According to the filing, “Trump University instructors also asked that students complete evaluations in order to receive their Certificates of Competition for the course and ‘pleaded for a favorable rating so that ‘Mr. Trump would invite [them] back to do other retreats.’ Mentors compelled students to complete the non-anonymous evaluations in their presence, filled out the forms themselves or pressured students into giving them higher scores or completing the evaluations before they had an opportunity to see if Trump University’s promises would be fulfilled.”

“Rather than being photographed with Donald Trump, [students] were offered the chance to have photos taken with a life-size photo of Donald Trump.”

4. Trump U pretended to be a school: “Some instructors claimed that a Trump degree ‘is a bit of a college degree’ and that Trump offered ‘graduate programs, post graduate programs, [and] doctorate programs.'” Furthermore, “Instructors routinely referred to themselves as ‘faculty’ and to the Trump University program participants as ‘students’ and then ‘graduates’ after completing a course and going through ‘graduation.'”

5. Trump didn’t develop the curriculum: “The contents and materials presented by Trump University were developed in large part by a third-party company that creates and develops materials for an array of motivational speakers and seminar and time-share rental companies…Trump University’s repeated claims that the seminar material consisted of Donald Trump’s own personal strategies were part of a deliberate effort to appropriate generic material common to motivational seminars on real estate and to characterize this material as being Donald Trump’s own proprietary information.”

6. Not-so-secret investing secrets: “Instructors represented that the three-day seminar would provide special instruction to students on how to obtain ‘private’ or ‘hard money’ sources of financing, rather than traditional loans from banks…In fact, there is no evidence that the three-day seminars contained substantive instruction on ‘how to raise private money,’ and the supposedly special ‘database’ of lenders turned out to be a list photocopied from an issue of Scotsman Guide, a commercially available magazine.”

8. The seminar was a bait and switch: “When students reached Trump University’s three-day seminar, they learned that contrary to what they had been promised at the free seminars, they were not going to learn everything they needed to know to start investing. Instead they were told they had to purchase additional programs to get the help they would supposedly need—and that they would fail if they did not continue at Trump University.