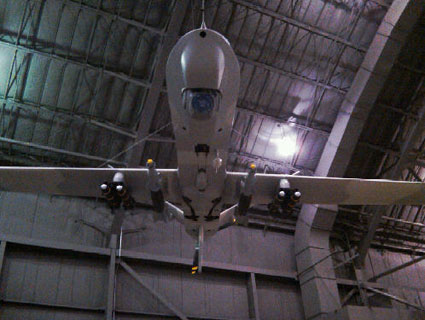 According to a 2010 Department of Homeland Security report obtained under the Freedom of Information Act by the Electronic Frontier Foundation, the Customs and Border Protection (CBP) suggested arming its fleet of drones with “non-lethal weapons designed to immobilize TOIs,” or targets of interest, along the nation’s borders. Currently, none of the agency’s 10 domestic drones is weaponized; the recently passed Senate immigration bill, which would require a minimum of four additional drones, stipulates that those be unarmed as well.

The report doesn’t exactly rise to the level of proposing drone strikes against Arab Americans “sitting in a cafeteria in Dearborn, Michigan,” as Sen. Rand Paul (R-Ky.) postulated during his 13-hour drone filibuster in March. But it’s sure to fuel the concerns not only of border residents and immigration reform groups but of privacy watchdogs and anti-government protesters paranoid about domestic surveillance.

Jennifer Lynch, an EFF attorney, told the Atlantic Wire, “This is the first I’ve seen any mention of any plans [from a federal agency] to weaponize any drones that fly domestically.” However, local law enforcement agencies have been considering arming drones with the same weapons used in riot control—rubber bullets, tear gas, bean bag rounds. The CBP report didn’t specify the weapons it has in mind.

The EFF also obtained flight records for CBP drones. The records reveal that the agency used drones not only on the border, but also to conduct law enforcement operations in conjunction with other federal and state agencies. The purpose of those operations ranged from investigating fishing violations to recording “surveillance imagery” for the FBI.