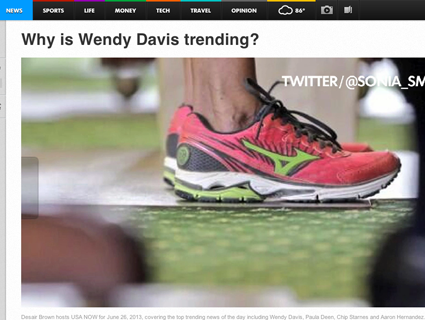 Yesterday at 11:30 AM, Wendy Davis, a Texas state senator, began filibustering a piece of anti-abortion legislation that threatened to shut down all but five of the state’s abortion clinics. The filibuster, which lasted almost 11 hours, ended dramatically around midnight: Senate Republicans managed to do in Davis’ filibuster but opponents of the bill literally screamed and yelled for fifteen minutes in order to delay the vote until after midnight, preventing it from passing (for now).

But what did she wear?, you were wondering, right? The media is on it: Davis’ choice of footwear, a pair of pink sneakers, was front-and-center in many, many articles that ran on the filibuster this morning.

From the lead paragraph in this morning’s Washington Post:

The job of state senator isn’t considered one of the most physically demanding occupations a Texan could take up. But Fort Worth’s Wendy Davis put on her running shoes to run out the clock. Pink-sneakered, intellectually steeled, and back-braced for the long haul, Davis intended to slog through a grueling 13-hour-long filibuster…

There appears to be only two things standing in the way of Texas passing a package of sweeping new restrictions on abortions that would effectively close most abortion clinics in the state: Wendy Davis and her pink shoes. 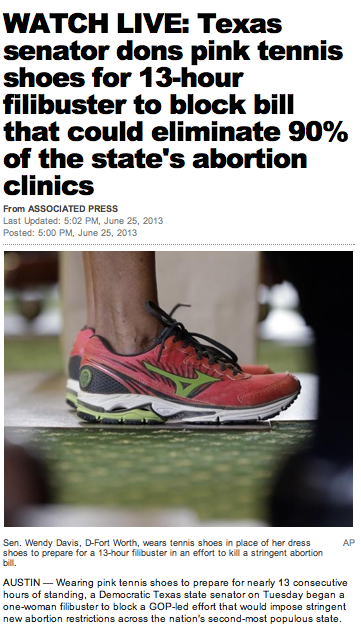 Wearing pink sneakers, the Democratic state senator from Fort Worth began her filibuster at 11:18 a.m., knowing that she would need to remain on her feet for almost 13 hours to prevent the vote on what would be the strictest abortion laws in the country.

Texas State Senator Wendy Davis may or may not be able to stop a controversial anti-abortion bill from becoming law, but she’s not going to let it get through without a fight. Davis took the floor of Senate chamber on Tuesday—armed with a pair of comfortable pink sneakers—and will attempt to filibuster the bill.

What about Mother Jones? We’re no better than the rest of them:

Donning pink tennis shoes, Texas state Sen. Wendy Davis (D-Forth Worth) waged an almost 11-hour filibuster Tuesday to thwart a GOP-backed bill that would have shuttered most of the abortion clinics across Texas.

Ladies, if you would like to buy the shoes Wendy Davis wore during her #SB5 filibuster, you can find them here https://t.co/xCaWxNd7e4

The pink sneakers that a filibuster made famous http://t.co/08koX4rJq3

And at the New York Times:

A Fort Worth Democrat, Senator Wendy Davis, 50, stood in her running shoes on the green carpeted floor of the Senate chamber and spoke about a bill with some of the toughest abortion restrictions in the country from 11:18 a.m. until about 10 p.m.

The Times‘ original story on the filibuster referred to Davis as “a petite Fort Worth Democrat in pink sneakers” and didn’t mention Davis’ name until the 17th paragraph. Eventually, they amended their article, removing the word “petite” and putting Davis’ name earlier in the piece, but Wonkette has a post tracking the revisions.

It’s true that sneakers are an unusual choice for a state legislator—and that the specifics of filibustering, like how deal with bodily functions when you can’t leave the Senate floor, can get interesting. But there are also a lot of non-fashion-related things worth noting; perhaps the mostly white, male room she was speaking to, or the tears she shed while reading testimony from one woman who was forced to abort her pregnancy because of medical complications.

Or, yeah, stick with the shoes. Your call.