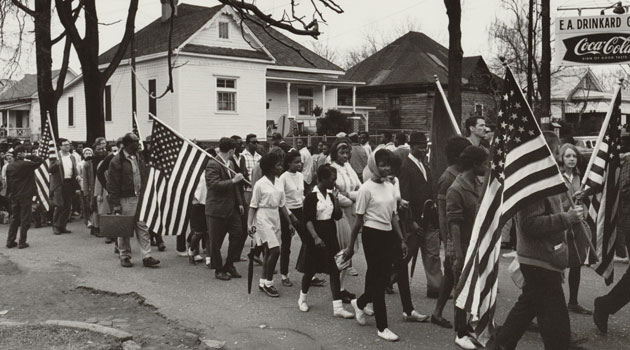 Participants, some carrying American flags, marching in the civil rights march from Selma to Montgomery in 1965. BuyEnlarge/Zuma

“Is it the government’s submission that the citizens of the South are more racist than the citizens of the North?” John Roberts, the Chief Justice of the Supreme Court, asked that in February during oral arguments over the fate of the Voting Rights Act, a 1965 civil rights law. Donald Verrilli, the government’s chief lawyer, said no. Not surprisingly, the Obama administration was not willing to assert that citizens in Southern states were statistically more likely to hold racist beliefs. Without making such a claim, though, it was harder for the government to defend the VRA’s requirement that some states—but not others—seek federal approval (which lawyers call preclearance) before changing their voting laws.

The eight states that are required to seek preclearance are determined by a formula intended to pick out areas with a history of discrimination. (Places that go for 10 years without discriminating can escape the requirement.) On Tuesday, the Supreme Court voted 5-4 to strike down that formula as unconstitutional. Here’s the idea that led to that decision: If all states are equally racist (or not racist), why not treat them equally?

Certainly plenty of people outside of the South are racist, and plenty of people in the South are not. But here’s the trouble: There’s social-science evidence that, 150 years after the Civil War, Southern states do have bigger racism problems than states outside the South. And many of them are the same states that the VRA requires to seek federal approval before changing their voting laws.

The key study on this subject is new. In May, Christopher Elmendorf and Douglas Spencer—law professors at the University of California-Davis and the University of Connecticut, respectively—released a paper arguing that the list of states required to obtain federal approval under the VRA “remarkably” mirrors “the geography of anti-black prejudice” in the United States. “What we have generated,” Elmendorf says, “is an answer to the question that the chief justice asked during oral arguments and [Verrilli] was either unable or unwilling to answer.” The answer, they argue, is yes.

Elmendorf and Spencer used data from the 2008 National Annenberg Election Survey, which asked nonblacks to rank their own racial group and blacks regarding intelligence, trustworthiness, and work ethic. Respondents ranked their racial group above blacks by an average of 15 points in each of these categories, perhaps proving the Avenue Q claim that “everyone’s a little bit racist.” Elmendorf and Spencer, however, only counted a person as “prejudiced” if he thought his racial group was more superior to blacks than the average person—and only if he thought so in two or more of the three categories. That is, a respondent could think his race was a lot better than blacks and still not count as racist under their methodology.

The results were striking: The researchers’ mathematical model suggests that of the seven states in the country with the highest percentage of people who are biased against black people, six are Southern states—Louisiana, Mississippi, Texas, Alabama, Georgia, and South Carolina—required to seek federal approval for election law changes under the VRA. Arizona and Alaska, the other two states required to get the feds’ permission before changing their election laws, ranked much lower in anti-black bias. But as Elmendorf and Spencer note, these states are presumably required to seek that permission because of other bias—anti-Latino in Arizona and anti-Native American in Alaska—which their study did not measure. (Besides the eight states mentioned above, the VRA requires some counties and municipalities in seven other states to seek federal permission to change election rules.)

The researchers crunched the data several different ways to make sure they were getting valid results. But “whichever approach you pick, the Deep South states are close to the top,” Elmendorf says.

Elmendorf and Spencer’s study came too late: On Tuesday, the Supreme Court struck down the portion of the VRA that governs which states are and are not required to seek the feds’ permission to change their election rules. Now Congress will have to come up with new rules to determine which states this section of the VRA should cover. If lawmakers decide to embrace Roberts’ implication that states with more racist attitudes should receive special scrutiny, Elmendorf and Spencer’s study suggests they could end up with a list of VRA-covered states that looks a lot like today’s.

This story has been updated to reflect the Supreme Court’s ruling Tuesday morning.