I’ve been mulling over Antonin Scalia’s extraordinary outburst against the Voting Rights Act yesterday, but the more I think about it the more peculiar it seems.

Background first. The provision of the VRA at issue is preclearance, which requires certain states and counties with prior records of racial discrimination to get clearance from the Justice Department before they make changes to their election laws. My understanding is that there are two opposing constitutional interests here. First, under the principle of federalism, states have an interest in making and administering their own laws without getting prior permission from the federal government. Second, under the Fifteenth Amendment, the 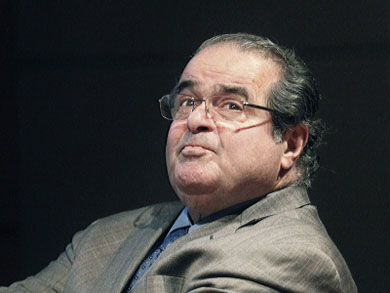 federal government has an interest in making sure that states don’t abridge the right to vote based on race or skin color. When the Supreme Court upheld the VRA in South Carolina v. Katzenbach, it explicitly noted that preclearance tested the boundaries of federal authority:

This may have been an uncommon exercise of congressional power, as South Carolina contends, but the Court has recognized that exceptional conditions can justify legislative measures not otherwise appropriate….Congress knew that some of the States covered by [] the Act had resorted to the extraordinary stratagem of contriving new rules of various kinds for the sole purpose of perpetuating voting discrimination in the face of adverse federal court decrees. Congress had reason to suppose that these States might try similar maneuvers in the future in order to evade the remedies for voting discrimination contained in the Act itself. Under the compulsion of these unique circumstances, Congress responded in a permissibly decisive manner.

In other words, Congress doesn’t have the inherent power to approve or veto state election laws. In fact, normally it wouldn’t have this power at all. But in this particular case, the court ruled, it had this authority because there were “unique circumstances” that caused the Fifteenth Amendment to trump the rights of the states. The misbehavior of the states in question had been so egregious, so longstanding, and so impervious to previous attempts to stop it, that Congress’s extraordinary remedy in the VRA was justified.

In other words, there really is a legitimate constitutional question here. Congress has the power to abrogate state authority only if suitably exceptional conditions apply, and it’s a proper question for the Court to decide whether those exceptional conditions still exist. Given this, why would Scalia let loose with this Limbaugh-esque analysis of why Congress reauthorized the VRA in 2006?

I think it is attributable, very likely attributable, to a phenomenon that is called perpetuation of racial entitlement. It’s been written about. Whenever a society adopts racial entitlements, it is very difficult to get out of them through the normal political processes….And I am fairly confident it will be reenacted in perpetuity unless—unless a court can say it does not comport with the Constitution… [T]his is not the kind of a question you can leave to Congress.

Scalia here is making it sound as if Congress just flatly can’t be trusted with this kind of decision. But why say something so outlandish when he has a perfectly conventional argument to make instead? Why not simply stick to the question of whether present-day circumstances remain exceptional enough to warrant such a significant intrusion into the customary right of states to make and enforce their own laws?

So I’m sort of stumped. Was there an actual reason Scalia went so far beyond what was necessary? Or was it just a cranky outburst that he made because, after all, who’s going to stop him? Even for Scalia, it seems pretty damn peculiar.