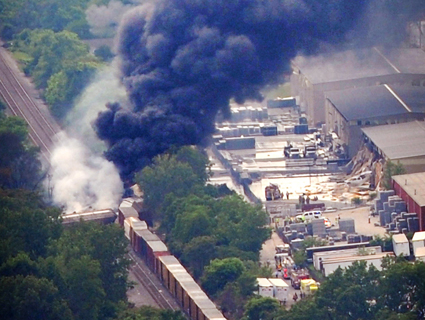 Fifteen train cars derailed in an industrial area in Rosedale, Maryland, causing an explosion and the collapse of several buildings.Kim Hairston/MCT/ZUMAPRESS.com

A train and a garbage truck collided outside of Baltimore on Tuesday evening, resulting in a large explosion that released smoke that could be seen miles away. CSX, the train’s operator, confirmed that the train was carrying hazardous chemicals that caused the explosion. The Washington Post reports:

CSX spokesman Gary Sease said the sodium chlorate in a derailed car near the front of the train exploded, igniting terephthalic acid in another derailed car. Sodium chlorate is used mainly as a bleaching agent in paper production. Oklahoma State University chemist Nick Materer said it could make for a potentially explosive mixture when combined with an incompatible substance such as spilled fuel.

Another chemist, Darlene Lyudmirskiy, of Spectrum Chemical Manufacturing Corp. in Gardena, Calif., said such a mixture would be unstable and wouldn’t need even a spark to cause a reaction.

“If it’s not compatible, anything could set it off,” she said.

The incident could have been much worse if other chemicals had been involved—chemicals like chlorine gas or anhydrous ammonia. When a Norfolk Southern train derailed in Graniteville, South Carolina, in 2005 and released chlorine, nine people died and 5,000 had to be evacuated. While not nearly that bad, the Baltimore explosion has brought renewed attention to the hazardous chemicals that are transported by rail in the United States.

Trains carry  64 percent of a class of chemicals known as “toxic inhalation hazards.”

In 2012, trains carried 189 million tons of chemicals. That only represents about 20 percent of all the chemicals shipped in the US. But trains carry 64 percent of a class of chemicals known as “toxic inhalation hazards” or TIH, like chlorine, that can be deadly if inhaled. Rail is the safest, most efficient way to transport those chemicals—one rail tank can carry as much as four trucks, and trains moving along a dedicated shipping line rather than on the highways, meaning that collisions are less likely, as researchers at Harvard’s Kennedy School of Government have pointed out.

Even if rail is safer than trucks, there are plenty of reasons to want to limit the amount of dangerous chemicals carried by rail. There’s always a chance of an accident, as Tuesday’s explosion demonstrated, and local governments and first responders don’t even know what’s traveling on those trains until an accident happens. Then there’s also the threat of a deliberate attack on either the rails or the chemical facilities where the tankers eventually end up. The best solution, says Greenpeace legislative director Rick Hind, is getting companies to shift from a “catastrophic chemical to a noncatastrophic substance or process”—that is, using chemicals that won’t explode or give off noxious fumes. These chemicals would be safer to transport, and safer to use when they reach their destinations.

Some companies and municipal water systems have already started phasing out the use of deadly chemicals like chlorine. But it would take a stronger regulatory push to make a larger switch happen. There was some effort to do so immediately after September 11, at the height of terrorism fears. But the Bush White House did not back it due to pressure from the chemical industry, recalls Bob Bostock, the homeland security adviser to the then-EPA Administrator Christine Todd Whitman. “That effort died before it really got started,” he says.

Now Bostock hopes that the EPA will use its regulatory authority under the Clean Air Act to “to require facilities to at least evaluate safer technologies.” “It’s very feasible to do so,” he says. “A lot of facilities have done it. A lot have not.”

Railroad operators aren’t particularly jazzed about transporting hazardous chemicals, either. But because a few companies control the majority of major railroads, they are required under federal “common carrier” rules that say they can’t refuse to carry TIH or other hazardous chemicals. The Association of American Railroads, the industry trade group, has asked Congress to allow them to “decide for themselves whether to accept, and at what price they are willing to accept, such materials for transportation.” AAR has also called for safer alternatives to hazardous chemicals as a means of reducing their own risk as carriers.