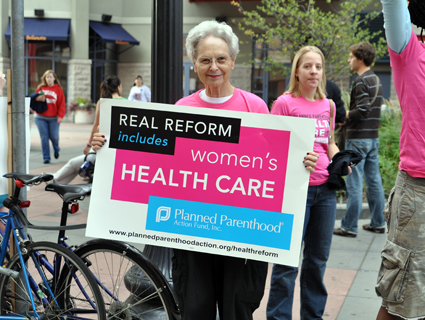 Memorial Day heralds two things in Washington: the return of seersucker suits and Supreme Court decision season. On Tuesday, the high court announced that it would not be hearing Indiana’s appeal in defense of its effort to defund Planned Parenthood.

Back in 2011, Indiana voted to block Medicaid funds from being used at Planned Parenthood clinics or any facility that provides abortions. State lawmakers exempted hospitals and surgical facilities, which made it pretty clear that they were going directly after Planned Parenthood. (Several other states have passed similar laws targeting the group.) The federal government blocked Indiana’s action because it is against the law to discriminate against specific health care providers. The Obama administration and Planned Parenthood won in court last year, but Indiana had asked the Supreme Court to hear the case.

The Los Angeles Times reported this morning on the court’s decision to decline to hear the case:

Without comment, the justices turned away Indiana’s defense of a 2011 law that would ban all Medicaid funds to an organization such as Planned Parenthood whose work includes performing abortions.

The high court let stand decisions by a federal judge in Indiana and the 7th U.S. Circuit Court of Appeals in Chicago that blocked the measure from taking effect. The “defunding law excludes Planned Parenthood from Medicaid for a reason unrelated to its fitness to provide medical services, violating its patients’ statutory right to obtain medical care from the qualified provider of their choice,” Judge Diane Sykes said last year for the 7th Circuit.