An ExxonMobil pipeline broke on Friday evening, dumping thousands of gallons of tar sands oil in Mayflower, Arkansas. The Pegasus pipeline starts in Illinois and carries 95,000-barrels of oil per day from Alberta’s tar sands to refineries in Texas. 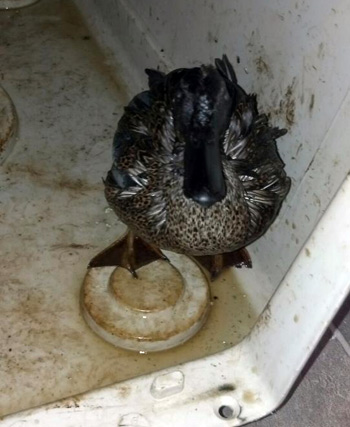 At least 22 homes had to be evacuated after the spill, and local residents have posted some alarming photos and video of the mess in their streets and backyards. The group HAWK Center (Helping Arkansas Wild Kritters) is also posting photos of oiled birds that have been rescued and brought in.

Exxon was cagey, at first, about giving an estimate of how much spilled, initially telling reporters it was “a few thousand” barrels or declining to give an estimate. In an interview with Inside Climate, a local official gave an estimate of 2,000 barrels (or 84,000 gallons). When I asked for a specific figure on the number of barrels spilled, this is what I got from Charlie Engelmann, a media relations adviser for Exxon Mobil Corporation:

A few thousand barrels of oil were observed in the area; a response for 10,000 barrels has been undertaken to ensure adequate resources are in place. Approximately 12,000 barrels of oil and water have been recovered. Crews are steam cleaning oil from property.

That’s still not a very specific answer. This actual figure is something that people will want to know, given that the spill is igniting even more debate about pipeline safety in general and the proposed Keystone XL pipeline in particular.

Meanwhile, an eagle-eyed tipster points out to Mother Jones that the company that provided the fuzzy map of where the oil spilled posted on the response site is the Center for Toxicology and Environmental Health, or CTEH, a contractor that has been criticized in the past for using bad data and a “long pattern of tainted results” in its environmental analysis. Based in Little Rock, the company also contracted with BP to test workers during the Gulf spill, prompting others in the field to complain that the company’s results were often skewed to favor whatever company had hired them. “They’re paid to say everything’s OK,” a toxicologist told Greenwire at the time. Here’s CTEH’s less-than-helpful map of the spill: 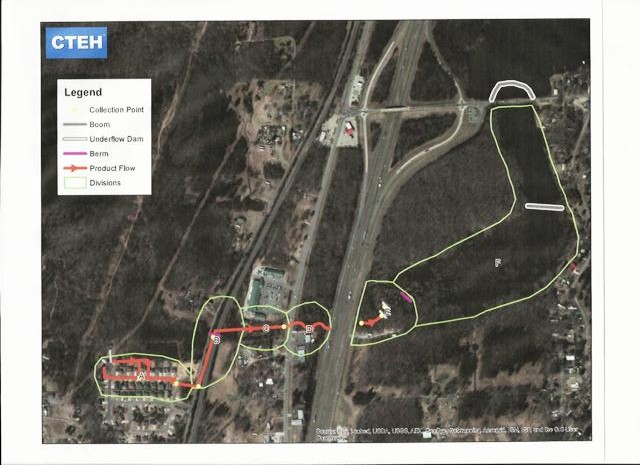 Engelmann told Mother Jones via email that CTEH is “conducting continuous air quality monitoring” at the spill site. “The air quality does not likely present a human health risk, with the exception of the high pooling areas, where cleanup crews are working with safety equipment,” he added.

When called, the phone number listed for the Mayflower Incident Unified Command Joint Information Center on the town’s website on Monday morning, the call went straight to an Exxon operations center in Fairfax, Virginia, where an Exxon press flack answered the phone.

This is a bit of a flashback to the 2010 Gulf spill—we’d call the joint information press line, and it would often be a BP employee on the line. I also asked Engelmann if it was all Exxon staff at the information office, to which he responded, “We are working with a number of entities, including the EPA, Arkansas Department of Environmental Quality, Arkansas Department of Health, Faulkner County and ExxonMobil Pipeline Company, among others, on response efforts.”

Of course company staff can answer some of my questions, but it’s hard to know if you’re getting reliable information when the responsible party is the one fielding the press calls.