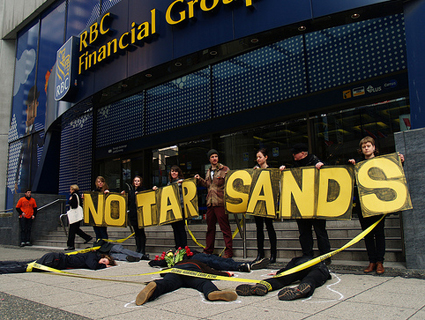 A mile-long Canadian Pacific Railway train derailed in Minnesota on Wednesday, spilling 15,000 gallons. Reuters reports that 11 of the 94 train cars came off the tracks about 150 miles northwest of Minneapolis.

Officials did not say whether the oil was from Canada’s tar sands, but the derailment is sparking still more debate over the controversial proposed Keystone XL pipeline that would carry tar sands oil into the US. Here’s a relevant excerpt from another Reuters piece:

Some experts have argued oil-by-rail carries a higher risk of accidents and spills.

“It is good business for the rails and bad safety for the public,” said Jim Hall, a transportation consultant and former chairman of the National Transportation Safety Board.

“Railroads travel through population centers. The safest form of transport for this type of product is a pipeline. This accident could—and ought to—raise the issue for discussion,” he added.

Others note that spills from rail cars are rare, and that delivering crude by rail has opened up opportunities in recent years for producers to develop huge volumes of oil production in areas of the United States that are not connected to markets by pipeline.

“It’s not very good publicity, but railroads are incredibly safe, they don’t spill often,” said Tony Hatch, independent transportation analyst with ABH Consulting in New York who has done work for major railroads. “It should not change the opportunity railroads have to make us more energy independent.”

We import more oil from Canada than any other country, so it’s worth noting that with or without the pipeline, we’re already moving oil into the US and there is a potential for spills.