In 1791, America’s founding fathers enacted a constitutional right to bear arms, in part to help citizen militias protect the homeland against foreign invaders. Some 300 years later, foreigners have become some of the Second Amendment’s biggest beneficiaries and shrillest advocates. In 2009, the United States imported 3.9 million guns, some 16 times more than we exported. Those imports accounted for 43 percent of new guns available to Americans that year. The vast majority—think Beretta, Glock, Taurus, and other name brands—came from countries with far stricter gun control laws than we have in the United States. 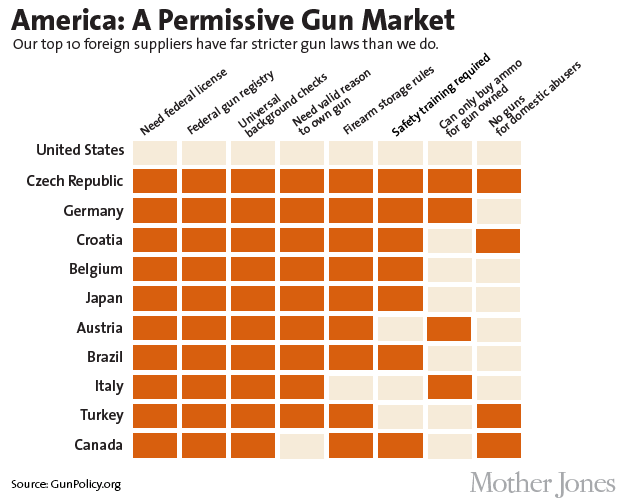 Every time another mass shooter unleashes a torrent of bullets in a school or theater, the world puzzles over America’s permissive approach to gun ownership. A story following up on the Sandy Hook massacre in Austria’s largest daily, Krone, noted the apparent link between “lax weapons laws” in the United States and our “high rate of gun killings, compared to other western nations.” But the newspaper didn’t mention how Austrian gun makers profit from and help perpetuate those lax weapons laws. In 2009, a whopping 67 percent of Austria’s gun exports went to the United States. Here’s the breakdown for our top 10 foreign suppliers. 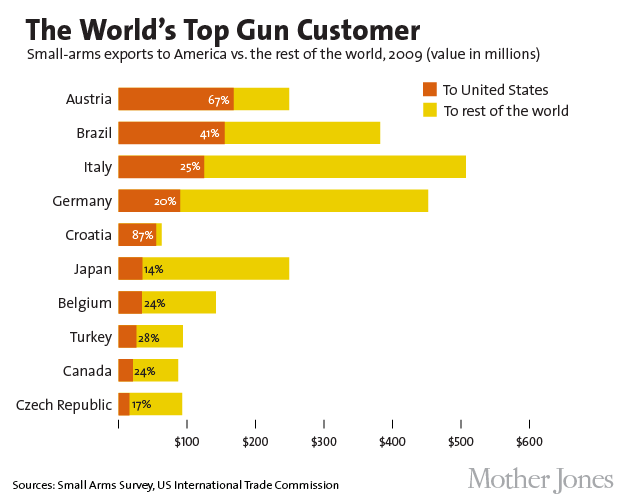 The National Rifle Association benefits handsomely from these relationships. In 2012, for instance, the Austrian pistol maker Glock funneled $115,000 to the group—a donation that isn’t reflected in the chart below. Based on available figures, we estimated that nearly half of the group’s gun company donations come from foreign manufacturers—the proportion rises substantially if you include donations from Springfield Armory, an American company whose top-selling XD pistol, one of the nation’s most popular handguns, is a relabeled Croatian weapon. 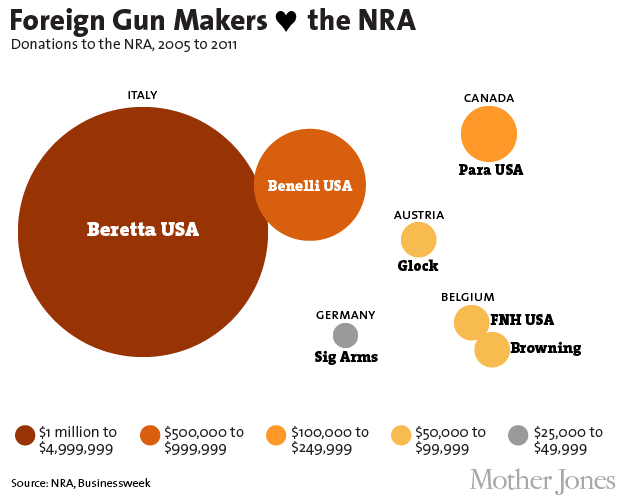 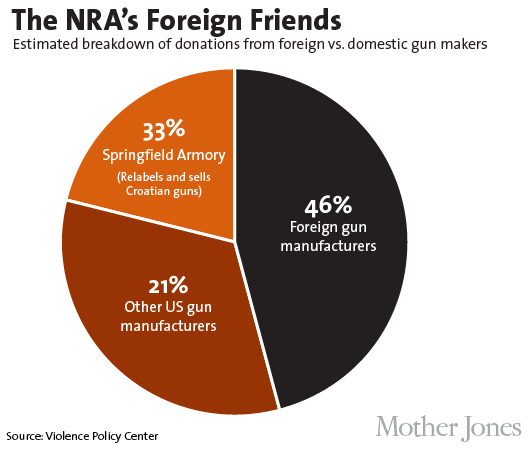 Clearly, foreign small-arms makers would not want to export their countries’ gun laws across the pond. But would tighter restrictions on gun ownership make us safer? Judge for yourself. 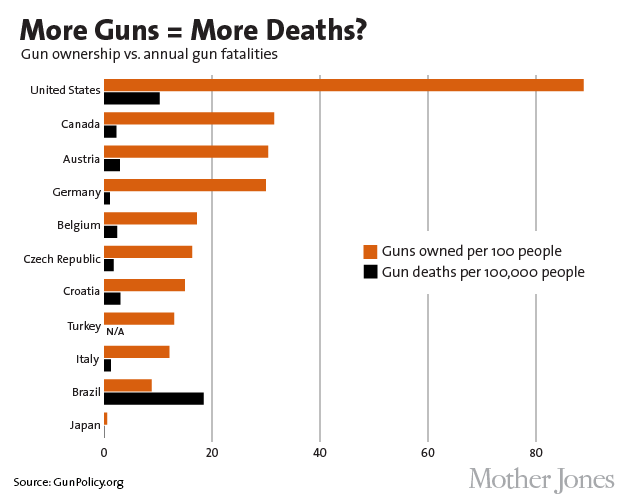 Except where noted, all data reflects the most recent year that figures were available across all countries listed in a given chart or table. The gun death data (per capita rates don’t vary a great deal from year to year) and corresponding population data is from 2011 for the United States; 2010 for Austria, Germany, Croatia, and the Czech Republic; 2009 for Italy; and 2006 for Belgium. Since Brazil, Japan, and Canada don’t offer comprehensive gun death stats in any given year, the data combines their stats on gun homicides, gun suicides, and accidental gun deaths for years ranging from 1999 to 2009 to reach an estimate of total gun fatality rates. (Population figures for those three countries were taken from the World Bank’s 2011 estimate.) The NRA does not disclose precise donation amounts from all of its corporate sources, but it arranges its corporate donors in various tiers depending on their level of giving. For example, Springfield Armory belongs to the NRA’s Joe Foss Society, which recognizes members who have donated between $1 million and $4,999,999. The breakdown in the donations pie chart was calculated by assuming that each company’s donation fell precisely in the middle of the appropriate range.