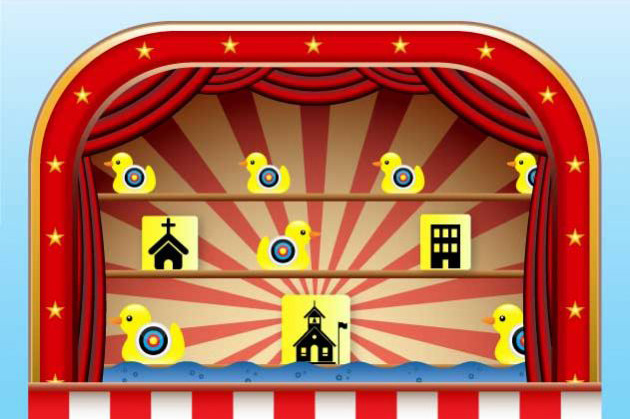 Editor’s note: A version of this piece was first published in the March 25 edition of USA Today.

Ever since the massacres in Aurora, Colorado, and Newtown, Connecticut, it’s been repeated like some surreal requiem: The reason mass gun violence keeps happening is because the United States is full of places that ban guns.

Second Amendment activists have long floated this theme, and now lawmakers across the nation are using it too. During a recent floor debate in the Colorado Legislature, Republican state Rep. Carole Murray put it this way: “Most of the mass killings that we talk about have been effected in gun-free zones. So when you have a gun-free zone, it’s like saying, ‘Come and get me.'”

The argument claims to explain both the motive behind mass shootings and how they play out. The killers deliberately choose sites where firearms are forbidden, gun-rights advocates say, and because there are no weapons, no “good guy with a gun” will be on hand to stop the crime.

With its overtones of fear and heroism, the argument makes for slick sound bites. But here’s the problem: Both its underlying assumptions are contradicted by data. Not only is there zero evidence to support them, our in-depth investigation of America’s mass shootings indicates they are just plain wrong.

Among the 62 mass shootings over the last 30 years that we studied, not a single case includes evidence that the killer chose to target a place because it banned guns. To the contrary, in many of the cases there was clearly another motive for the choice of location. For example, 20 were workplace shootings, most of which involved perpetrators who felt wronged by employers and colleagues. Last September, when a troubled man working at a sign manufacturer in Minneapolis was told he would be let go, he pulled out a 9mm Glock and killed six people and injured another before putting a bullet in his own head. Similar tragedies unfolded at a beer distributor in Connecticut in 2010 and at a plastics factory in Kentucky in 2008.

Or consider the 12 school shootings we documented, in which all but one of the killers had personal ties to the school they struck. FBI investigators learned from one witness, for example, that the mass shooter in Newtown had long been fixated on Sandy Hook Elementary School, which he’d once attended.

Or take the man who opened fire in suburban Milwaukee last August: Are we to believe that a white supremacist targeted the Sikh temple there not because it was filled with members of a religious minority he despised, but because it was a place that allegedly* banned firearms?

Thirty-six of the killers committed suicide at or near the crime scene. These were not people whose priority was identifying the safest place to attack.

Proponents of this argument also ignore that the majority of mass shootings are murder-suicides. Thirty-six of the killers we studied took their own lives at or near the crime scene, while seven others died in police shootouts they had no hope of surviving (a.k.a. “suicide by cop”). These were not people whose priority was identifying the safest place to attack.

No less a fantasy is the idea that gun-free zones prevent armed civilians from saving the day. Not one of the 62 mass shootings we documented was stopped this way. Veteran FBI, ATF, and police officials say that an armed citizen opening fire against an attacker in a panic-stricken movie theater or shopping mall is very likely to make matters worse. Law enforcement agents train rigorously for stopping active shooters, they say, a task that requires extraordinary skills honed under acute duress. In cases in Washington and Texas in 2005, would-be heroes who tried to take action with licensed firearms were gravely wounded and killed. In the Tucson mass shooting in 2011, an armed citizen admitted to coming within a split second of gunning down the wrong person—one of the bystanders who’d helped tackle and subdue the actual killer.

True security in our schools and other designated gun-free places may require more. Forbidding firearms alone clearly won’t keep violence away—not least because of how easily bad guys can get their hands on guns. Nearly 80 percent of the mass shooters we documented obtained their weapons legally.

Indeed, America is anything but gun free. We now have more than 300 million firearms in private hands. In the last four years, nearly 100 state laws have loosened restrictions on them. To varying degrees, every state except Illinois now allows guns to be carried in public.

All of which raises an obvious question: If more guns in more places is a solution to the bloodshed, then why did we just witness the worst year for mass shootings in recent history?

*Guns were in fact legal at the Sikh Temple of Wisconsin, contrary to a false report from Fox News. Wisconsin state law allows firearms to be carried in houses of worship unless explicitly barred on the premises; Amardeep Kaleka, whose father founded the temple and was killed during the attack, confirmed to me that there was no such ban in place then.