A team at the Pew Research Center spent a whole year monitoring Twitter discourse on major American political events, and instead of falling into a deep depression they wrote a study about it.

The findings, published Monday under the title, “Twitter Reaction to Events Often at Odds with Overall Public Opinion,” confirm—with lucid data—things you already know about Twitter if you have ever come into contact with Twitter: The popular micro-blogging site represents only a shred of American opinion, and trolls on Twitter tend to be vicious and unhappy.

The study compares opinion in national surveys with the substance and tone of “all publicly available Tweets.” The comparative analysis focused on eight events, including the 2012 election night and the first Obama-Romney presidential debate. Generally, the researchers found that Twitter opinion—fueled by a more tech-savvy generation—leaned left, with a majority being pro-Obama and approving of gay rights legislation: “Twitter users are considerably younger than the general public and more likely to be Democrats or lean toward the Democratic Party.” But that’s not what stuck out. From the study:

At times the Twitter conversation is more liberal than survey responses, while at other times it is more conservative. Often it is the overall negativity that stands out. Much of the difference may have to do with both the narrow sliver of the public represented on Twitter as well as who among that slice chose to take part in any one conversation.

On the presidential campaign: 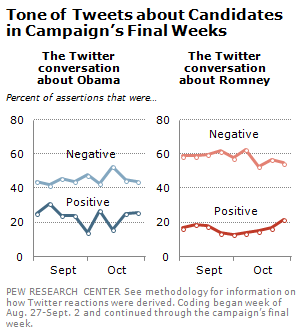 Still, the overall negativity on Twitter over the course of the campaign stood out. For both candidates, negative comments exceeded positive comments by a wide margin throughout the fall campaign season. But from September through November, Romney was consistently the target of more negative reactions than was Obama.

So this study conducted by the much esteemed Pew Research Center determined that Twitter users are partisan, hyper-critical, and do not necessarily speak for all of America. On a related note, other studies have concluded that going bald makes people sad, drinking while pregnant isn’t preferable, diet and exercise help you lose weight, and that carrying a loaded gun while severely intoxicated is a bad idea.