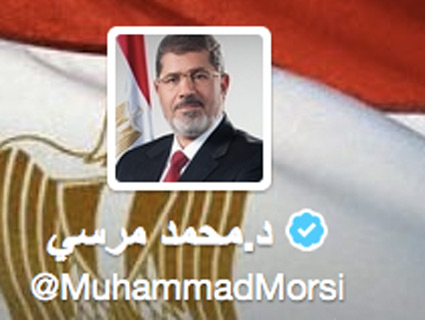 Muhammad Morsi, president of Egypt, is currently ranked as number 14 on the list of most-followed world leaders.Screenshot: <a href="https://twitter.com/MuhammadMorsi">Twitter</a>

If you are interested in following Mohammed Magariaf, the new president of Libya, he is indeed on Twitter, with a Klout score in the low 50s. And joining him on the world’s most gloriously addictive/time-sucking social media site is the majority of world leaders.

A new study (PDF) by The Digital Policy Council, the research arm of the consulting firm Digital Daya, finds that 123 of 164 countries (75 percent) now have a head of state who is tweeting (or perhaps has staff tweeting for them) from either a personal or government account. In 2011 DPC identified 69 actively tweeting heads of state. This 78-percent uptick is visualized in the chart below: 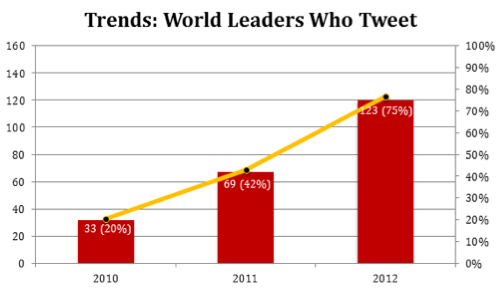 It only makes sense that more heads of state and national governments are utilizing Twitter for PR and propaganda purposes. “Based on these growth rates, the Digital Policy Council anticipates penetration on Twitter for world leaders to be nearing 100% in 2013,” the report states. “This would render Twitter as a de facto communication tool for all heads of state.”

For instance, Muhammad Morsi, Egypt’s new Islamist president, has been tweeting in Arabic to his now 850,000+ followers since late 2011 (he came in at No. 14 on DPC’s list). The government of war-torn Somalia has found time to Tweet some (Somalia was ranked No. 101 with 765 followers, narrowly beating out Iraqi prime minister Nouri al-Maliki, and the governments of Oman and Grenada). Hell, even the totalitarian regime of North Korea started Tweeting its anti-Seoul and anti-American propaganda—from the Pyongyang-based account @uriminzok—in 2010. (Not to be confused with @KimJongNumberUn, just to be clear.) North Korea did not qualify for DPC’s study, but currently has close to 11,000 followers and, in case you’re curious, follows these three accounts: 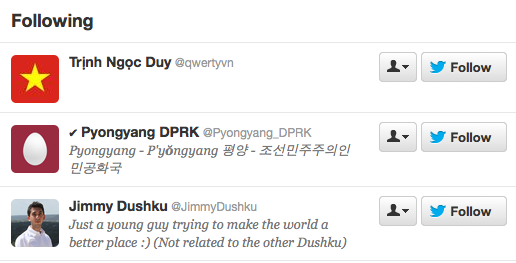 Here are the top five world leaders on Twitter, as ranked by DPC in December 2012: 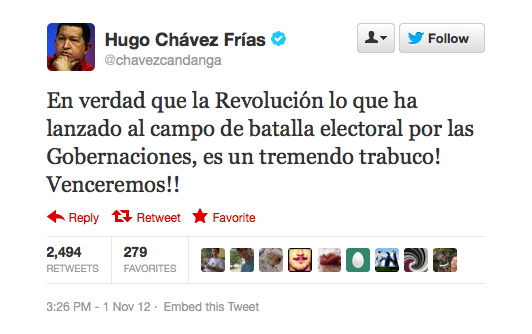 Closely watching developments in #Tunisia and praying for stability and calm for its people.