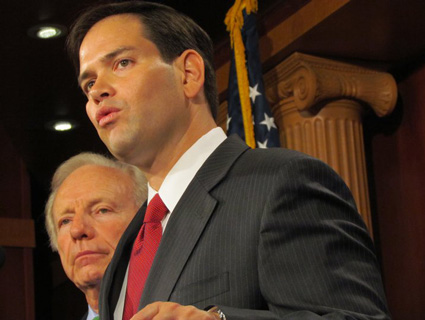 Rising conservative star and tea party favorite Sen. Marco Rubio (R-Fla.) is “riding to the immigration rescue,” according to the Wall Street Journal editorial page. While a bipartisan group of senators is at work on a comprehensive immigration reform proposal, Rubio is touting ideas of his own, which Journal editorial writer Matthew Kaminski says will seek to “triangulate, if you will—the liberal fringe that seeks broad amnesty for illegal immigrants and the hard right’s obsession with closing the door.”

Rubio, who is widely considered to be a strong contender for the 2016 Republican presidential nomination, hasn’t introduced actual immigration reform legislation, or gone beyond the broad strokes outlined in his interview with the Journal. Nevertheless, in the days following the interview’s publication on Saturday, conservative pundits have showered Rubio with praise. The Washington Post‘s Jennifer Rubin called Rubio’s proposal “bold,” and the Daily Caller‘s Matt Lewis writes that “although there is opportunity here, this is still an act of political courage.” Rubio also drew approval from 2012 GOP vice-presidential candidate Rep. Paul Ryan (R-Wis.), who wrote on Facebook that “I support the principles he’s outlined.”

Conservatives hailing Rubio may not realize how close to President Barack Obama he has moved on immigration, but opponents of reform, such as the Center for Immigration Studies’ Mark Krikorian, certainly noticed. “There’s nothing substantive in Rubio’s proposal that wouldn’t immediately be agreed to by President Obama,” Krikorian says. “This is the Rubio-Obama immigration plan.” In fairness, Krikorian notes, it’s also broadly similar to the George W. Bush immigration reform plan conservatives derailed in 2007.

The centerpiece of Rubio’s proposal—his plan to handle the approximately 11 million undocumented immigrants who are already here—is strikingly similar to the plan Obama described it in 2011. Rubio told the Journal that undocumented immigrants in the US would need clean records, and that they would have to “pay a fine, pay back taxes, maybe even do community service. They would have to prove they’ve been here for an extended period of time. They understand some English and are assimilated. Then most of them would get legal status and be allowed to stay in this country.” Eventually, the Journal says, Rubio’s proposal would allow undocumented immigrants to apply for citizenship.

All of Rubio’s immigration reform criteria—fines, back taxes, proof of residence, background checks, and learning English—are part of Obama’s plan. The Journal describes Rubio as “charging up the middle” on immigration, even as the Florida Republican rides next to the president. And Rubio’s big idea isn’t much different in substance from what immigration reform advocates want.

Rubio’s immigration principles “are in line with [Democratic] principles,” says Frank Sharry, director of the pro-immigration reform group America’s Voice. “It’s huge…We need conservatives to buy into the framework of a broad bill that simultaneously puts undocumented immigrants on the road to citizenship, modernizes our legal immigration system, and focuses enforcement on unauthorized hiring and exploitation in the workplace. Rubio is there.”
Still, “there are many, many important details”—such as how long or difficult the road from legal status to citizenship would actually be—for reform advocates and opponents “to fight over,” Sharry notes. One key difference is that Rubio seems willing to break up his proposal into multiple bills, which would make it easy for Republicans to kill off the parts they don’t like. Nevertheless, says the Immigration Policy Center’s Mary Giovagnoli, immigration reform advocates believe that some form of legalization of the undocumented is the most important element of any proposal, and if there is agreement on that, the rest can be negotiated. “I’m more optimistic than I have been for the last few years,” Giovagnoli says.

Rubio hasn’t actually offered a written proposal, however. He spent last spring talking about putting together an alternative to the DREAM Act, the bill that would have granted citizenship to undocumented immigrants who were brought to the US by their parents and were eligible to go to college or serve in the US military. Rubio wanted to offer those immigrants legal status, but not citizenship. Two months later, Rubio didn’t have a bill, and his position on this slice of immigration reform became moot when the Obama administration issued a Department of Homeland Security directive sparing DREAM Act-eligible immigrants from deportation.

According to the New York Times, like Obama’s 2011 proposal, the plan currently being negotiated in the Senate is remarkably similar to what Rubio has discussed, and would include fines, the payment of back taxes, “and other hurdles for illegal immigrants who would obtain legal status.” As in Rubio’s proposal, those who gain legal status would ultimately be allowed to apply for citizenship. Immigration reformers are now waiting to see if Rubio will back up his words with specific actions that will bolster the prospects of bipartisan legislation—and, no doubt, the White House is, too.

“We are encouraged…that Sen. Rubio’s thinking—as reported—so closely reflects the president’s blueprint for reform,” White House Press Secretary Jay Carney told reporters Tuesday. “We hope that it signals a change in the Republican approach to this issue.”