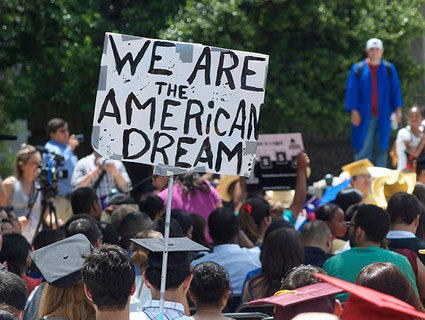 Supporters of the DREAM Act at a staged graduation ceremony on Capitol Hill<a href="http://www.flickr.com/photos/seiu/3658433940/">SEIU International</a>/Flickr

In a major campaign and policy development, the Obama administration is set to issue a Department of Homeland Security directive that would prevent DREAM Act-eligible undocumented immigrants from being deported.* According to the Associated Press:

Under the administration plan, illegal immigrants will be immune from deportation if they were brought to the United States before they turned 16 and are younger than 30, have been in the country for at least five continuous years, have no criminal history, graduated from a U.S. high school or earned a GED, or served in the military. They also can apply for a work permit that will be good for two years with no limits on how many times it can be renewed. The officials who described the plan spoke on the condition of anonymity to discuss it in advance of the official announcement.

Here’s why this is a big deal: Obama has previously issued executive orders setting priorities for immigration enforcement, but this directive would grant DREAM Act-eligible undocumented immigrants work authorization—that is, allow them to obtain jobs legally in the United States. That will afford them the opportunity to stay in the US and work without fear of deportation, though a temporary and fragile standing that could easily be reversed if Mitt Romney moves into the White House next year.

Republicans will call this “amnesty.” Yet this move doesn’t grant citizenship or legal status. It’s essentially a promise not to deport and permission to work—unless the order is reversed. This is a temporary solution to a policy problem that Congress has consistently lacked the courage to resolve: the presence of undocumented immigrants who are here through no fault of their own and who have never known another home. And the devil is in the implementation. Previous promises to exercise discretion by the administration haven’t panned out as advertised.

This is, however, a solution to a political problem. With the economy still struggling, Obama is dependent on a strong turnout by Latino voters, many of whom have familial or social ties to people here illegally. Until now, Obama hasn’t had much progress to show on immigration reform, having presided over a record number of deportations, even as Republicans accuse him of lax enforcement. This decision helps Obama draw a contrast with Romney, who staked out a position on immigration to the right of his rivals during the GOP primary contest and who has fumbled his attempts to move toward the center on the issue. What Obama is doing here resembles a more reversible version of the legislation Sen. Marco Rubio (R-Fla.), a potential Romney running mate, has promised to offer.

As TPM’s Brian Beutler writes, Republicans sympathetic to Rubio are all but certain to object on process grounds, arguing that Obama’s DHS is doing by fiat what Rubio wants to do through an act of Congress. But Rubio’s proposal (which has been touted for months without an actual bill being put forth) would grant legal status to those eligible. The DHS directive does not do that.

Nevertheless, it’s hard to overstate the impact of this decision on those eligible. At least for the time being, they will no longer have to fear exile from the only place they’ve  ever really lived. Arguably, Obama could have done this earlier—but by doing it now, the president sharply defines a fundamental difference between him and Romney. If Romney wins, and he sticks to his stated position on immigration, the DREAMers will have to leave.

*Correction: A previous version of this post incorrectly described the administration’s move as an executive order. It is a Department of Homeland Security directive. The text has been corrected.