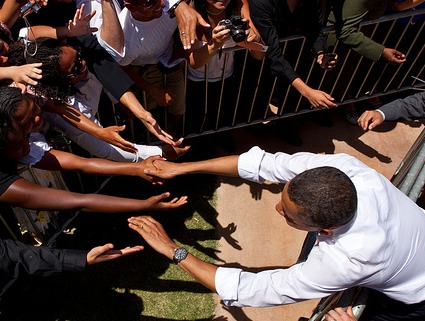 Speaking to an audience in Las Vegas, President Barack Obama made his case for immigration reform Tuesday, invoking the idea of America as a nation of immigrants and saying he believed Republicans were truly committed to getting reform done.

“It’s easy for the discussion to take on a feeling of ‘us’ versus ‘them,'” Obama said. “A lot of folks forget that most of ‘us’ used to be ‘them.'”

Obama’s proposal resembles, to a large degree, the one put forth by the bipartisan Senate “Gang of Eight” Monday. It proposes adding more resources for immigration enforcement and border security, a mandatory employment verification system, and a path to citizenship—what critics will call “amnesty,” but that the White House has referred to as “earned citizenship.” Like the Senate bill, undocumented immigrants on temporary legal status while they are “going to the back of the line” to apply for citizenship would not be eligible for federal benefits.

On these broad principles, the Senate and the White House are in agreement; but, of course, the details matter, and there are key differences:

The two variables that are likeliest to cause friction between the White House and Congress are security requirements on the path to citizenship and the length of the path to citizenship itself. This afternoon on the Senate floor, Sen. Marco Rubio (R-Fla.), one of the Republican members of the “Gang of Eight,” warned Obama: “If this endeavor becomes a bidding war to see who can come up with the easiest, quickest, and cheapest pathway to a green card possible, this thing is not going to go well.” The clear implication is that despite bipartisan agreement on a path to citizenship, Rubio—and by extension, other Republicans currently supporting a reform push—could easily withdraw their support, based on how that path is paved.

Obama made it clear that if the Senate bill fails, he won’t simply be giving up. “If Congress is unable to move forward in a timely fashion,” Obama said. “I will send up a bill based on my proposal and insist that they vote on it right away.”