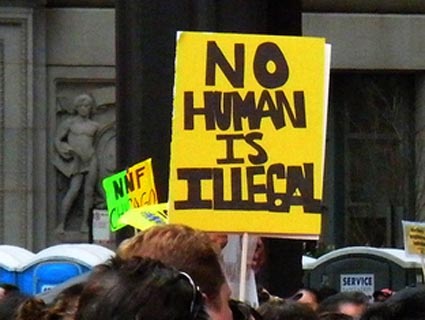 The plan includes a path to citizenship, which excludes those with criminal backgrounds and those who have committed crimes since entering the United States. Undocumented immigrants would have to register with the government and go through a background check, and would be allowed to stay under “probationary legal status,” after which they would have to “go to the back of the line” before eventually qualifying for citizenship. They will not be eligible for federal benefits during their probationary legal status.

Interestingly, the plan makes the path to citizenship easier for two groups of immigrants: those eligible for the DREAM Act (young people brought to the US as children who are prepared to go to college or join the military) and agricultural workers. A cynical person might point out that in doing so, the plan goes out of its way to help the most sympathetic immigrants, and those most essential to powerful business interests. Or, as the plan puts it, workers who “who commit to the long term stability of our nation’s agricultural industries.” The plan also states that immigrants who have “received a Ph.D. or Master’s degree in science, technology, engineering, or math from an American university” will automatically get a green card, but doesn’t state whether that applies even if the individual is undocumented.

The framework makes reform contingent on things that can’t happen until the immigration system is reformed. While perhaps politically necessary, the plan throws more personnel and flying robots at the border, despite the fact that the US already spends more on immigration enforcement than on all other aspects of federal criminal law enforcement combined. The plan implies that undocumented immigrants can only be legalized after a commission “comprised of governors, attorneys general, and community leaders living along the Southwest border” certify that the measures have worked, which puts final legalization of the country’s 11 million undocumented immigrants in the hands of Republican officials like Arizona Gov. Jan Brewer, who don’t want it to happen.

Beyond that, however, the fact is that enforcement can only do so much to deter illegal immigration, because those seeking a better life will brave ever more dangerous obstacles to get here. What’s needed is an immigration system that allows enough people in to work so that people think they have a decent enough chance to get here that risking their life to do so isn’t worth it. The framework is incredibly vague on this point, hinting at a guest worker program but never using the phrase, and simply stating that the plan will “provide businesses with the ability to hire lower-skilled workers in a timely manner when Americans are unavailable or unwilling to fill those jobs.” This, not more drones at the border, is arguably the most important aspect of deterring illegal immigration, and the plan gives it short shrift.

The Gang of Eight’s framework isn’t all terrible—it’s just unworkable. It places conditions it’s unlikely to meet, and then further compounds the problem by putting a veto in the hands of people who are likely to oppose the plan even if those conditions were met. Immigration reform advocates will be wary of the employment verification requirements (particularly given the error-prone nature of the current system), while the immigration restrictionist right will be completely opposed to any plan that offers undocumented immigrants a path to citizenship rather than “self-deportation.”

Politically, the immediate question is whether the presence of senators like Rubio and Flake can limit the backlash on the right, since any immigration reform bill still has to get through the Republican-controlled House of Representatives. But even if the entire plan were written, passed, and signed by the president tomorrow, much of it—legalization in particular—could be prevented from ever happening.

UPDATE 1:05 PM EST: The Washington Post’s Greg Sargent reports that the Democrats inolved in the plan see the Southwestern commission’s recommendations will be “non-binding,” which means they won’t have a veto over the process. Rubio’s office however, has told Sargent that “all of the enforcement mechanisms must be in place and operational before a pathway to citizenship is made accessible to undocumented immigrants. ” The question remains then, is how the bill determines the security requirements have been met so that the legalization process can occur.