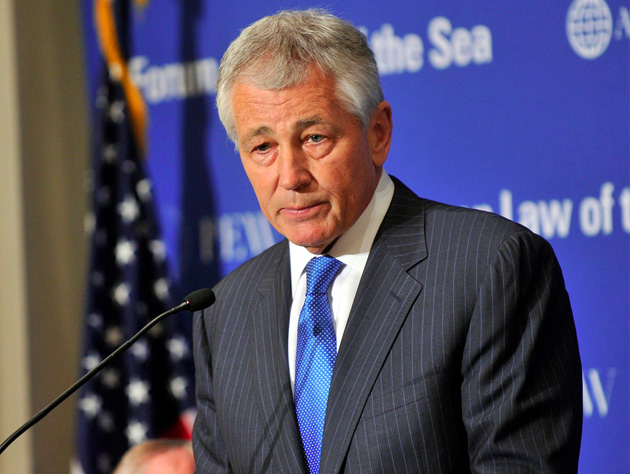 Like pundits in search of an apocryphal Barack Obama skeet-shooting photograph, Capitol Hill conservatives have been scampering for a reason to oppose former Republican Sen. Chuck Hagel’s nomination as defense secretary. Last week, they deemed Hagel too conservative for Obama supporters: He’s an anti-Semite! He’s not cool with the gays! But now that those ad hominems have failed to inspire much chattering beyond the Beltway, Republicans are attacking Hagel from the right: He’s a dirty hippie peacenik who wants to steal our atomic security!

“Hagel has also been an outspoken supporter of nuclear disarmament and the Global Zero Movement, which seeks a world free of nuclear weapons,” Sen. James Inhofe (R-Okla.) wrote this week in a Washington Post op-ed titled “The wrong man to be defense secretary,” before rapping off a laundry list of global conflict hotspots that supposedly require deterrence from the United States’ 5,113 nuclear warheads. The Weekly Standard argued breathlessly that Hagel “co-authored a controversial report for Global Zero that urges deep cuts to America’s nuclear forces—by unilateral means, if necessary—on the path to global nuclear disarmament.” A nuclear missile lobbyist-turned-“senior fellow in National Security Affairs” warned in US News of “the detrimental effects that Global Zero would have on America’s strategic capabilities.”

Sounds menacing! Indeed, the right has made haste to turn Global Zero into the next Agenda 21, painting the organization as a conspiratorial cadre of globalizing socialist radicals. But as Joe Cirincione, director of the anti-nuclear Ploughshares Fund, points out today at The Atlantic, the conservatives’ “basic premise—that reducing and eventually eliminating nuclear weapons is a wild, left-wing position—is unquestionably false.” In fact, total disarmament is the ultimate goal of the Nuclear Non-Proliferation treaty—which was ratified by the Senate and President Nixon in 1969.

But what of Inhofe’s alleged global conspiracy to weaken American security and sap and impurify all of our precious bodily fluids? Who are the wacko extremists supporting Global Zero’s anti-US, no-nukes mission? Here’s a partial list of signatories…conservative signatories:

Cirincione also notes that such “radical extremists” as Henry Kissinger, Colin Powell, and James Baker have expressed support for ending nukes. Then there’s the no-good beatnik who said this:

His name? Ronald Reagan. You can practically smell the patchouli!