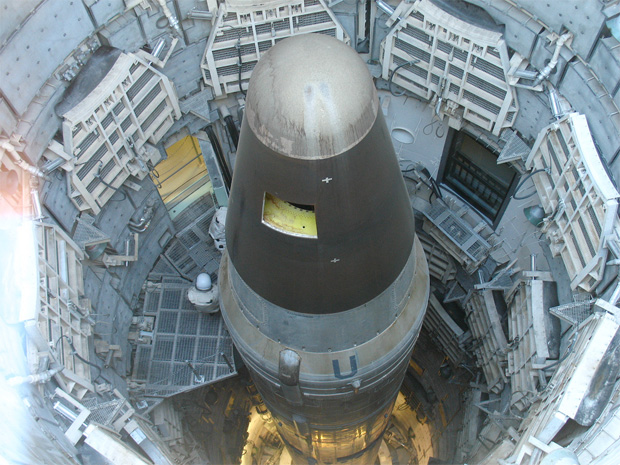 If the White House has its way, the United States could soon reduce its nuclear arsenal dramatically, possibly even to the point where it would possess fewer atomic bombs than congressmen. And though Republicans on the Hill are already complaining that the plans are “reckless lunacy,” the administration appears to have plenty of military thinkers on its side.

What the truck? US big rigs loaded with nuclear bombs are secretly cruising the interstate near you. (See the maps!)

According to a report this week from the Associated Press, President Obama is considering three proposals by the Pentagon to cut the number of deployed nukes. The biggest proposal would reduce America’s active stockpile to just 300 to 400 warheads—fewer than the country has had since the earliest days of the Cold War. Since the dawn of the nuclear age, the US has reportedly built close to 70,000 atomic bombs. The recent New START treaty with Russia requires both countries to cut their deployed warheads to 1,550, so these new reduction plans would be dramatic, indeed.

Any real movement on this front may not come until 2013; follow-up reporting by the Washington Post suggested that the White House won’t make a change until it resumes negotiations with the Russians, which is likely only to come after presidential elections take place in both countries this year. But the fact that plans are brewing for a major arsenal reduction is itself significant, and it signals where Obama may really be headed on nuclear strategy if elected to a second term.

The Department of Defense’s top dogs spent much of their time in Congress on Wednesday stressing that all options are still on the table, including maintaining the current number of nukes. Even so, Republicans pounced on the proposed reductions. “I just want to go on record as saying that there are many of us that are going to do everything we possibly can to make sure that this preposterous notion does not gain any real traction,” Rep. Trent Franks (R-Ariz.) declared in a House Armed Services Committee Hearing. (He was the one who deemed the plan “reckless lunacy.”) Sen. Jim Inhofe (R-Okla.), a powerful advocate for nuclear forces, ridiculed the plan as a cynical reelection ploy by Obama. (Catering to public opinion on spending reductions—imagine that.)

As I’ve reported before, many conservative politicians, and some moderate and progressive ones, have historically considered America’s nuclear arsenal to be sacrosanct. After all, it’s backed by a robust and expensive weapons complex that keeps legions of contractors in business. But away from Capitol Hill, American academics and military officers are getting beyond the sound bites and provincial interests, and asking the impolitic question: In the post-Soviet age can the United States do as much—or more—with fewer nukes? The answer seems to be: Yes, we can.

On the eve of the New START signing in 2010, three Air Force researchers argued in a military journal that the US should tweak its nuclear strategy to focus on “proportional deterrence”—the idea that America doesn’t need to annihilate its enemies out of existence but instead just needs enough firepower to threaten an enemy’s most valuable targets. It’s straight out of Clausewitz: You can win merely by taking away the adversary’s will to fight—like that moment at the end of WarGames, when the self-aware missile-launching computer realizes that global thermonuclear war is as futile as tic-tac-toe: “A strange game. The only winning move is not to play.”

The “lesser” nuclear nations in NATO, like France, have long practiced proportional deterrence; it’s also at the heart of the atomic strategies of rogue states like North Korea and (potentially) Iran, which could never build as many bombs as the United States, but could exert leverage by threatening Tokyo or Jerusalem with a single warhead. In an era of great fiscal strain and shifting military goals, the idea is catching on among US strategists. “Small numbers of nuclear weapons produce dramatic effects,” the Air Force authors wrote. “In fact, the United States could address military utility concerns with only 311 nuclear weapons in its nuclear force structure while maintaining a stable deterrence.”

Last year, after the Air Force journal article was published and New START was signed, Paul K. Davis, a researcher for the RAND Corporation, wrote a white paper theorizing that the US could go down to 300 nuclear warheads and maintain its security objectives, assuming defenses and more conventional attack weapons were beefed up. (Part of his argument was that non-nuclear rogue nations and small hotspots are deterred as much by regular air and ground forces as by atomic warheads; does it really matter if we could flatten Tehran with a big mushroom cloud or with a bunch of conventional Tomahawks?) And as I reported on recently, a spate of scientists, researchers, and ex-government analysts have come to the same conclusion: America’s 5,000-plus active warheads are far more numerous and costly than is necessary to keep the nation safe.

Will Republicans accede to a sweeping drawdown of US nuclear might? Beyond the knee-jerk emotions on top national security issues, there’s an awful lot of defense pork—not just missiles, but also bombers, submarines, and scientific research—bound up in our nuclear program. That makes the most dramatic reduction scenarios highly unlikely to pass muster in Congress. But if the White House and Pentagon push one of their more modest proposals—cutting the number of bombs to, say, 700 or 1,000—that could represent a reasonable compromise that still offers compelling financial savings and progress toward greater global stability. Faced with a plan like that, resistant congressmen might end up looking like just a bunch of Dr. Strangeloves.