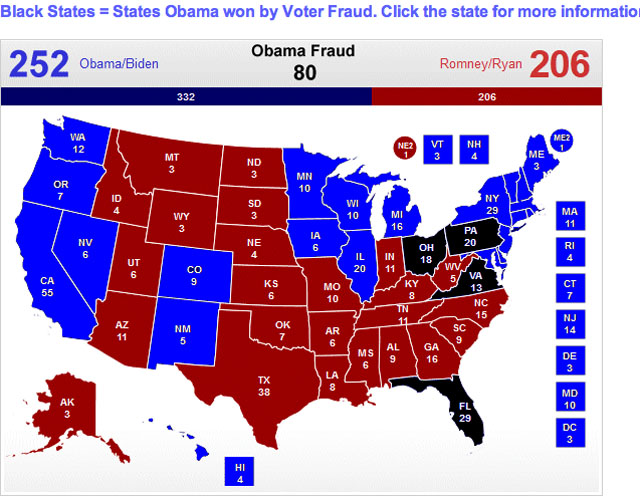 Dean Chambers launched the website UnskewedPolls.com in the final months of the election to counter what he saw as a Democratic bias in most presidential polls. Chambers’ site was a hit among Fox-watching, reality-denying conservatives. He predicted Romney would win 275 electoral college votes and Obama would win 263.

Chambers was, as he later admitted, horribly, embarrassingly wrong. But the embarrassment continues.

This week, Chambers launched a new site, BarackOFraudo.com. As the URL suggests, Chambers does not believe Obama won the 2012 election fair and square. Instead, Chamber contends that Obama won the swing states of Ohio, Pennsylvania, Virginia, and Florida “by voter fraud.” (That’s the map posted above.)

Post-election, there’s no evidence of widespread voter fraud in any of these states, and certainly nothing suggesting Obama’s wins in those four states depended on voter fraud. So Slate‘s Dave Weigel asked Chambers for evidence backing up his serious accusations. What followed was a collision between fact-based reporting and fact-free magical thinking:

“I’m getting credible information of evidence in those states that there enough numbers that are questionable and could have swung the election,” he says. “I’m only putting good credible information on there, like the actual vote counts, reports, and mainstream publications reporting voter fraud. There’s a lot of chatter, though. There are articles people have sent me that don’t hold up. Crazy stuff.”

What’s not crazy? “Things like the 59 voting divisions of Philadelphia where Romney received zero votes,” says Chambers. “Even Larry Sabato said that should be looked into.” (I’ve looked into this: 57 precincts gave McCain no votes in 2008. There’s such a thing as a 99 percent Democratic precinct, and such a thing as a 99 percent Republican precinct.) Same story in Ohio. “Some of the precincts or divisions in cleveland were projected to be 99 percent Obama. That’s a part of the state where it’s known that a lot of ballot box scamming has been done in the past. There were isolated reports of people voting for Romney and having votes changed, though they didn’t get much attention.

What about Virginia, then? “When votes were being counted on election night, 97 percent of the precincts were counted, and Romney was still leading 50-49,” says Chambers. “When that remaining 3 percent were counted, a lead of 80,000 or so votes for Romney were turned into 120,000 for Obama.” I pointed out that Virginia’s stagger-stop-stagger count often works like that, with Democrats gaining in the end. “I was surprised it wasn’t being projected for Romney when 97 percent was in,” said Chambers. (The state was actually called earlier based on vote patterns.)

Fortunately, Chambers’ failure to come with a country mile of predicting the presidential race means no one will take his voter fraud jeremiad seriously. Not even the Drudge Report, an avid endorser Chambers’ Unskewed efforts, has stumped for his latest venture.