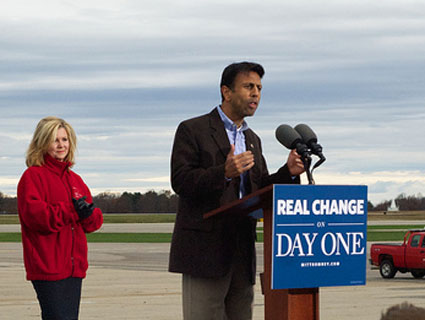 Mitt Romney initially called his remarks on the 47 percent video unearthed by my colleague David Corn “inartfully stated.” But since his defeat, he’s returned to a political theory that divides the United States into makers and takers, arguing that President Barack Obama only succeeded by providing young people, women, and minorities with exhorbitant “gifts” to buy their support, in the form of things like health care coverage and help with student loan debt. (Jon Stewart piled on with some gifts of his own devising.)

“What the president’s campaign did was focus on certain members of his base coalition, give them extraordinary financial gifts from the government, and then work very aggressively to turn them out to vote, and that strategy worked,” Romney said on a post-election conference call with donors.

A better example of an unearned “gift” is being born the son of a wealthy, famous politician.

My colleague Kevin Drum has already addressed why Romney’s remarks are ridiculous—political parties reward their constituencies, and Romney would have pursued goodies for GOP backers had he been elected. Financial institutions would have been very happy with a Romney administration that repealed Dodd-Frank, military contractors would have been delighted with Romney’s plan to raise military spending to astronomical levels, and Romney’s wealthy donors would have been delighted with his tax cuts for high earners. These are all “extraordinary financial gifts,” and unlike student loans or health care coverage, they do nothing to help ensure that being born into a family of modest financial means doesn’t prevent a person from succeeding. Help with student loan debt doesn’t mean you didn’t have to work hard to get good grades. A better example of an unearned “gift” is being born the son of a wealthy, famous politician so that you’ll never have to worry about student loan debt.

The more interesting phenomenon, however, is the oppobrium from Romney’s fellow Republicans. Louisiana Gov. Bobby Jindal, who likely has his own presidential ambitions, called Romney’s remarks “absolutely wrong,” and said “We have got to stop dividing American voters.” Wisconsin Gov. Scott Walker backed up Jindal, saying that the GOP is the party that “helps people find a pathway to live the American Dream.” Conservative writer JP Freire, echoing a theory that Romney’s conservatism didn’t sell in part because it was not genuine, wrote “I think Romney’s saying what he thinks a conservative would say.”

Jamelle Bouie: “If there’s a problem with Romney’s statement, it was the language, not the sentiment.”

My former American Prospect colleague Jamelle Bouie, writing at the Washington Post, has a different theory, namely that Republicans are rejecting Romney’s remarks because they’re politically harmful—not because they see them as incorrect. “If there’s a problem with Romney’s statement, it was the language, not the sentiment.”

I think Bouie has it right. If Romney is saying “what he thinks a conservative would say,” it’s probably because there are so many conservatives saying it. Rush Limbaugh, whose influence on conservatism dwarfs Romney’s, explained the 2012 election results by saying “People are not going to vote against Santa Claus, especially if the alternative is being your own Santa Claus.” The sentiment was repeated on Fox News incessantly, with on-air personalities like Eric Bolling saying “people voted to continue to get free stuff,” and Bill O’Reilly saying Romney was “right on the money.” This notion is deeply flattering to conservatives who would like to imagine themselves as rugged individualists, and those who disagree with them politically as lazy moochers.

As with the 47 percent tape, several conservative intellectuals have rejected Romney’s statements and explained why they were incorrect. In both cases, however, Romney’s problem was not diverging from conservatism so much as expressing it in ugly and unappealing terms. The Republican reaction from party leaders like Jindal is not a rejection of the worldview underlying Romney’s remarks, which is extremely popular in right-wing media. It’s an expression of political opportunism from politicians who want to leave their footprints on Romney’s back as they chase their own ambitions. If it were anything else, you’d see Jindal telling Rush Limbaugh or Fox News, not Romney, to shut up.