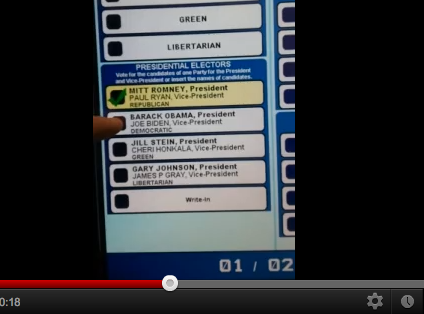 An electronic voting machine in Perry County, Pennsylvania, that changed a President Obama vote to one for Mitt Romney is now back online, after officials received a complaint and recalibrated the machine, Mother Jones has confirmed.

A viral YouTube video posted mid-morning Tuesday by user “centralpavoter” shows someone repeatedly trying to vote for President Obama on a digital touchscreen, and the screen locking in a vote for Mitt Romney instead. The user posted a link to the video on Reddit, writing: “I asked the voters on either side of me if they had any problems and they reported they did not. I then called over a volunteer to have a look at it. She him hawed for a bit then calmly said ‘It’s nothing to worry about, everything will be OK.’ and went back to what she was doing. I then recorded this video.”

What happens when electronic voting machines fail, and why aren’t they more reliable? Don’t miss our handy explainer.

The user wrote that he had no problem voting for candidate Jill Stein.

MSNBC’s Zachary Roth reported that a Pennsylvania electronic voting machine was taken out of service after the video went up, but Mathew Keeler, a spokesman for the Pennsylvania Department of State, says the machine is back online again—though he couldn’t confirm whether that rejiggered terminal was the same machine featured in the video.

“There was a single complaint, so they recalibrated the machine, did a test run, and put it back online. We’ve had no complaints since then,” Keeler says. While he couldn’t say for certain that this was the machine that “centralpavoter” attempted to use, he added that “we believe they are probably connected.”

Check out the video here: