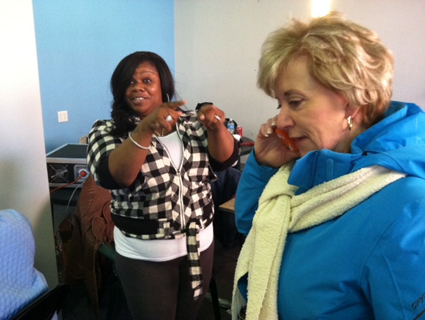 Trailing in the polls going into election day, Connecticut GOP Senate candidate Linda McMahon is trying something new: Pretending she’s a Democrat. The Connecticut Mirror reports that McMahon, the former World Wrestling Federation executive, has dressed supporters hanging out at the polls today in “I Support Obama and McMahon” t-shirts designed to resemble those worn by Democrat-backing Services Employees International Union organizers:

“It clearly is a rip off of our shirts,” said Paul Filson, the political director of SEIU, which represents many minority health care workers. “It definitely is confusing.”

The shirts are part of an effort by McMahon to blunt the urban vote Murphy needs in Hartford, Bridgeport and New Haven, where her workers also have left literature urging a vote for Obama and McMahon.

Here’s a photo of said literature, which identifies McMahon not as a Republican, but as the nominee of the Independent party. It may be too late to make a difference. The New York Times‘ Nate Silver gives Democratic Rep. Chris Murphy a 95.5 percent chance of winning the seat being vacated by retiring Independent Joe Lieberman.

This wouldn’t be the first time a blue-state Republican has mimicked a Democrat. In 2006, then-Maryland Senate candidate Michael Steele depicted himself as a Democrat at campaign events and in sample ballots handed out in Prince George’s county.

If McMahon really does support Obama, she should call her bank. According to FEC filings, she and her husband have given $150,000 to Restore Our Future, the pro-Romney super-PAC. 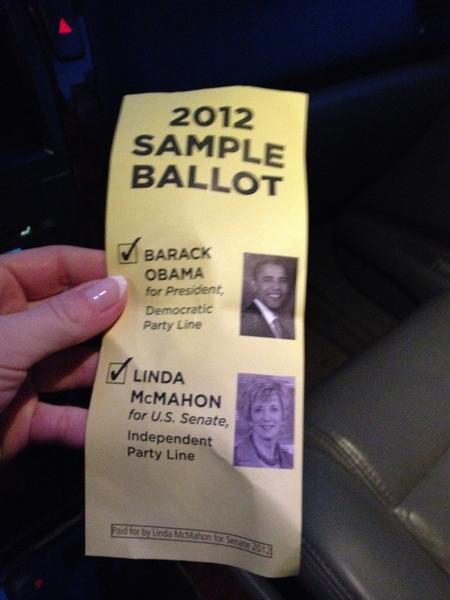