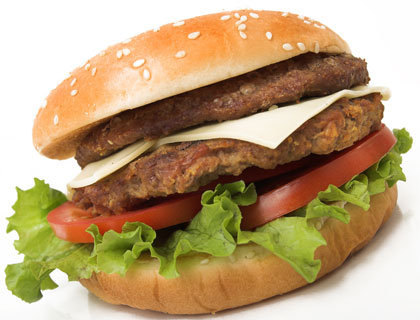 Pundits largely took two things away from the debate last night: President Obama turned in a lackluster performance, and moderator Jim Lehrer let Mitt Romney walk all over him. A presidential debate moderator’s job is not unlike a parent with two squabbling six-year-olds: While it’s important to maintain neutrality, it’s also necessary to find out which kid is lying about cutting the legs off all the Barbie dolls. Because Lehrer could hardly get a word in last night, let alone call out any questionable truths, we’ve done it for him: by comparing the statements made by Barack Obama and Mitt Romney on “The Whopper Scale.” Five Whoppers means that the statement is complete baloney. One means that the statement is kind of tasteless, but basically real: So…like the beef you’ll find in fast food restaurants!

The Statement: “Let—well, actually—actually it’s— it’s—it’s a lengthy description, but No. 1, preexisting conditions are covered under my plan.”

How Accurate Was It? Coverage for preexisting conditions keeps the most vulnerable Americans from falling through the cracks, and according to the Department of Health and Human Services, without Obamacare, up to 129 million citizens could be denied coverage. Romney, who has repeatedly promised he will repeal Obamacare, is misleading those Americans here. According to Talking Points Memo, even a top Romney adviser implied yesterday that under Romney’s plan people with pre-existing medical conditions would likely be unable to purchase insurance.

The Statement: “[Unlike Obama] We didn’t put in place a board that can tell people ultimately what treatments they’re going to receive.”

How Accurate Was It? Romney didn’t go so far as to invoke Sarah Palin’s “death panels” in describing Obama’s health care plan, but that’s essentially what he was referring to. The idea that there is one board to rule them all, which will determine what kind of treatment Medicare patients receive, is false. The board Romney is referring to is the Independent Payments Advisory Board, which, according to PolitiFact, is “forbidden from submitting any recommendation to ration health care” and can’t make decisions about individual patients.

The Statement: Obama said: “The average middle-class family with children would pay about $2,000 more [under Romney’s tax plan]. Now, that’s not my analysis; that’s the analysis of economists who have looked at this.” And in response, Romney replied: “Now, you cite a study. There are six other studies that looked at the study you describe and say it’s completely wrong.”

How Accurate Was It? Romney has pointed to these studies before (this time, he added one) in trying to convince the middle class that tax cuts for the wealthiest Americans are a good idea. The problem is, these aren’t reliable studies. According to the Huffington Post, three of the “studies” are opinion pieces, which are not academic in nature and have an overlapping author. One is paid for by Romney for President Inc. And the last one, an actual study, is being misinterpreted by the Romney campaign.

The Statement: “I’ve put forward a specific $4 trillion deficit reduction plan. It’s on a website. You can look at all the numbers, what cuts we make and what revenue we raise. And the way we do it is $2.50 for every cut, we ask for a dollar of additional revenue, paid for, as I indicated earlier, by asking those of us who have done very well in this country to contribute a little bit more to reduce the deficit.”

How Accurate Was It? According to the Washington Post’s Fact Checker, “virtually no serious budget analysis agreed with this accounting.” Obama’s figure includes two questionable sources of income: the bipartisan, $1 trillion budget reduction cleared by Congress last year (which would apply to Romney, if he is elected), and also billions in so-called savings from leaving Iraq and Afghanistan, which, as you’ll see next, don’t really count.

The Statement: “I think it’s important for us to…take some of the money that we’re saving as we wind down two wars to rebuild America and that we reduce our deficit in a balanced way.”

How Accurate Was It? “The use of this war gimmick is quite troubling,” writes Maya MacGuineas, president of the Committee for a Responsible Federal Budget. As the committee points out, the $850 billion Obama claims the United States is getting by leaving Iraq and Afghanistan hardly amounts to savings: Instead, it’s money borrowed from abroad, which needs to paid back with interest. But at the very least, Obama is right that we won’t be continuing to funnel money into active conflict zones.

How Accurate Was It? Obama repeated the $5 trillion figure several times, then Romney denied that he even has a tax cut of that scale. So who’s right? According to PolitiFact, Obama’s figure, which is based on a study done by the Tax Policy Center, is “accurate but misleading.” That number includes tax cuts over the next 10 years. And while Romney does have tax cuts of that scale, he theoretically plans to reduce tax breaks to offset the cuts. But the problem is, no one knows how Romney plans to do that exactly.