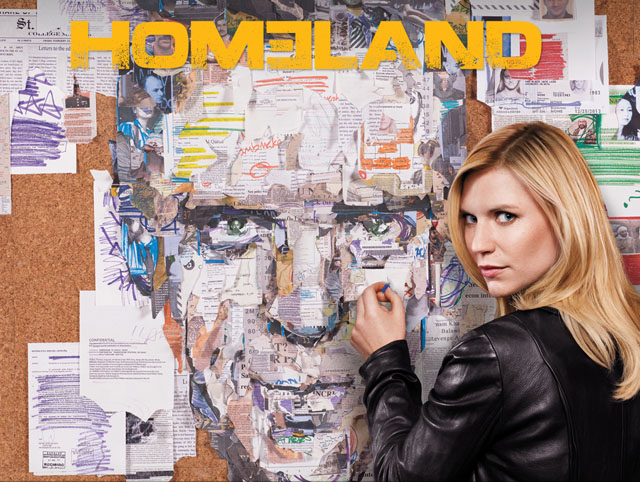 It’s hard to tell how clever Showtime’s Homeland—whose second season started last Sunday—actually is. One early scene in the season premiere showcases the range of acceptable views for cable news pundits on bombing Iran: A leftist describes the logic of Israel bombing Iran to stop Iran from bombing Israel as “maddening”; a “centrist” opines that military action is sometimes necessary; a right-winger notes that “the Arab religion doesn’t value human life the way we do.” A fourth voice points out that Iranians are not Arabs.

The scene does not take place on cable news, however. It is an argument between children at a prestigious Quaker private school where prominent government officials send their children (a clear stand-in for Sidwell Friends). Is this setup mere exposition, or a biting satire of a glib media conversation about war that never rises above the level of an argument between children?

Reportedly President Barack Obama’s favorite new TV show, Homeland racked up four Emmy awards for its first season, despite its long parade of implausibilities. It isn’t a realistic assessment of the national security state so much as an exploration of what the war on terror does to us, seen through the eyes of those we might imagine manning the ramparts. We are meant to be horrified: Season one nearly turned a lion of a Marine into a terrorist, and drove the gifted intelligence analyst on his trail out of her mind. But despite that timely and interesting premise, the first season sidestepped an opportunity to show how America would actually react to a successful terrorist attack aimed at decapitating the country’s civilian leadership.

The world of Homeland looks like ours in broad strokes, but its particulars are pure soap opera. Season two opens up with scenes that may seem both prescient and familiar: The US embassy in Beirut is besieged by flag-burning protesters days after a “successful” Israeli bombing of Iranian nuclear facilities. It name-checks recent developments in national security, like the rolling up of the CIA’s network in Lebanon and the prospective showdown over Iran’s nuclear program. When you start describing the characters, though, Homeland sounds like a telenovela for staffers at defense think tanks: War hero and jihadist sleeper Nicholas Brody (Damian Lewis), who came within seconds of suicide-bombing the president’s entire cabinet at the end of season one, is now a congressman and potential running mate for Vice President William Walden (Jamie Sheridan), who’s making a run at the White House. Disgraced CIA analyst Carrie Mathison (Claire Danes), ejected from the agency for bipolar disorder, is now teaching English to Arabic speakers, while her mentor Saul Berenson (Mandy Patinkin) is in Beirut chasing Brody’s Al Qaeda mentor, Abu Nazir (Navid Negahban). The acting is so fantastic that you don’t realize how completely silly all of this sounds until you try to explain the plot to someone who hasn’t seen the show.

If season one lacked the courage to follow through with its premise, the first two episodes of season two suggest Homeland is taking some key cues from the hawkish side of US national security politics, assuming that somehow Israel could bomb Iran without any repercussions other than a few protests at American embassies, when the most likely outcome is dragging the US to war. Sometimes, the show seems to have sprung fully formed from the heads of conservatives like Rep. Michele Bachmann (R-Minn.), who recently warned of “Muslim Brotherhood infiltration” of the US government. Stealth jihadists are everywhere, it seems—not simply getting elected to Congress and potentially joining a presidential ticket, but playing prominent roles in the media and seducing high-level intelligence officials. “These are the people who have tortured you,” Brody’s wife, Jessica (Morena Baccarin), says to him, slamming his Koran on the floor after discovering his conversion. Brody’s daughter—who earlier garnered a dim reputation at her fancy private school for showing compassion for Muslims and mocking a classmate who advocated the nuking of Iran as a mass-murdering “douche”—watches solemnly as her father buries his desecrated holy book, and she begins to respect rather than fear his new spirituality. Only he’s kind of a terrorist, so, whoops!

Homeland has a gift for mocking US politics, whether left or right, as infantile: At a party hosted by defense industry lobbyists, Vice President Walden asks Brody, “Do you really give a shit about the Arab Street? They yell ‘death to America’ no matter what we do.” As Brody and Jessica are leaving, she brings up wanting to volunteer at a charity for disabled veterans, while Brody suggest the best thing to do for vets would be to murder all the defense industry lobbyists at the party they just left, presumably because there would be no wars without corporations to lobby for them. How seriously are viewers supposed to take criticism of American national security policies when they’re all coming from a guy who’s spying for Al Qaeda?

But the show’s treatment of politics doesn’t get much more complicated than that. It directs us to sneer at the cowboy callousness of government higher-ups, but besides Brody, it offers a dim and limited view of the bad guys. The show’s terrorists still might as well be twirling their mustaches. The big disappointment about Homeland is not that it’s unrealistic; it’s that so far, the show wants to be braver than it actually is.