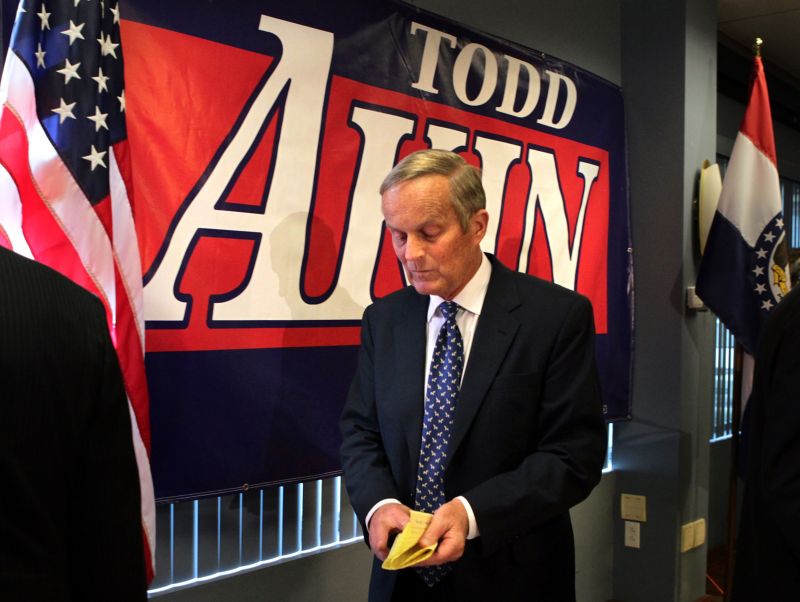 Tuesday was the final deadline for Rep. Todd Akin (R-Mo.) to drop out of the Missouri Senate race. Despite the desperate pleas of his Republican colleagues, who called on him to bow out following his August remarks claiming that women who are victims of “legitimate rape” can’t get pregnant. Akin’s refusal to exit the race prompted the Democratic group American Bridge to unleash all their opposition research, which documents other eyebrow-raising comments Akin has made over the years.

The “Akin Files” include quite a few doozies, on topics such as: how banning hate crimes actually increases them, how a defense spending bill authorized bestiality, and why health insurance for poor kids is like the Titanic. Here are some of the greatest hits, via Huffington Post.

On why passing anti-hate-crime legislation named for Matthew Shepard, the young gay man murdered in Wyoming in 1998, would actually increase hate crimes:

“The Senate version came across, a lot of Tea Party people take a good look at that bill and they’re going, ‘we’re worried that this may give Obama authority to bring troops in and arrest Americans and detain them for long periods of time.’ Ok, so that was their concern,” Akin said at a rally outside the Capitol. “They should have read it closer, because it also legalized bestiality. The Senate gets a little weird.”

“We’re going to give that money to give free health insurance to children with families making more than $80,000, children of illegal immigrants,” Akin said in 2007. “The Democrats are about to vote for something which will make the Titanic wreck look small.”

American Bridge also released some other clips from the Akin highlight reel, including this complaint about how the Civil War took away state’s rights (you know, because they could no longer enslave people):

The fact that over a period of time the federal government has taken over more and more and more authority is a major problem. I don’t disagree with the premise of it. The question is how do you get the cat back in the bag. When was it that happened? Well it happened most predominately historically during wars, and the worst case was the Civil War where we lost states’ rights more than any other particular situation.

And here’s Akin on how President Obama is basically the Anti-Christ: